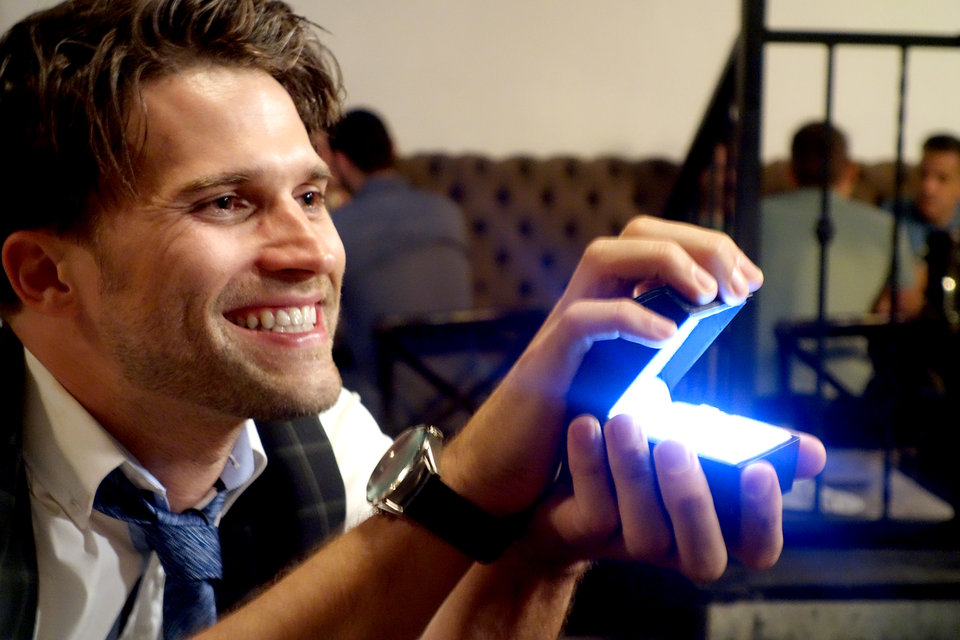 It’s official!!! 32-year-old model Tom Schwartz proposed to his longtime girlfriend 29-year-old Katie Maloney on Vanderpump Rules tonight. This ring was NOT on a string. It was the real deal and how cute and nervous was Schwartz!?

Tom painstakingly planned his perfect proposal — thankfully while Vanderpump Rules was being filmed in July.

The proposal happened at Pearl’s Rooftop on Sunset Blvd. in L.A. as the cast dined on oysters, crab cakes and petite filet mignon for dinner. Schwartz was visibly nervous and unusually quiet during the meal ordering several beers to calm his nerves.

He talked about the momentous occasion on his Bravo blog,

“Well well well. I did it. I sealed the deal. Put a ring on it. ….. Key elements to the proposal were surprise, not just for Katie but for everyone present, the perfect ring, great friends and a little quirk with the decoy proposal.”

“The ring was really my anchor though. My ace in the hole. Even if I would have completely botched the proposal, the ring was so perfect that I couldn’t have failed. Kyle Chan was absolutely crucial in helping make this ring come to fruition……”

Of course Tom had to make a visit to Katie’s boss and situation-handler Lisa Vanderpump to get her approval and advice on the proposal. Lisa teases Tom, but ultimately admits that she is impressed. Although I think Tom may be more excited about his ring choice than his fiancee.

“Sitting down with Lisa was a special moment for me as well. I haven’t had a lot of proud moments with her so to sit down, confidently and proud and tell her my intentions it felt real swell. Tom was also very generous in letting my steal his birthday glory. He is a class act and has been there for me since the beginning. Him and Jax have both been instrumental in my transition here.”….

Of course Tom was smart enough not let everyone  — especially Jax Taylor know he was doing it. He appeared very nervous on the episode, but claims he was quite calm (or maybe intoxicated! Did you see how many drinks he ordered?)

“It’s funny watching it back. The way I remember it, I really wasn’t that nervous. Usually people look cool on the outside and are sweating underneath in high pressure situations. I didn’t necessarily feel a lot of pressure. I looked nervous on the outside but I felt at peace, kind of a bliss inside.”

I think my favorite part of the proposal was the decoy proposal Tom orchestrated a few feet a way. That was brilliant! Tom arranged for a model he works with to be pretend-proposed to so Tom could step in and take the ring and present it to Katie.

The proposal was a shock to everyone except for Sandoval who helped Schwartz get dressed for the special occasion.

1 thought on “Tom Schwartz and Katie Maloney get officially engaged!”