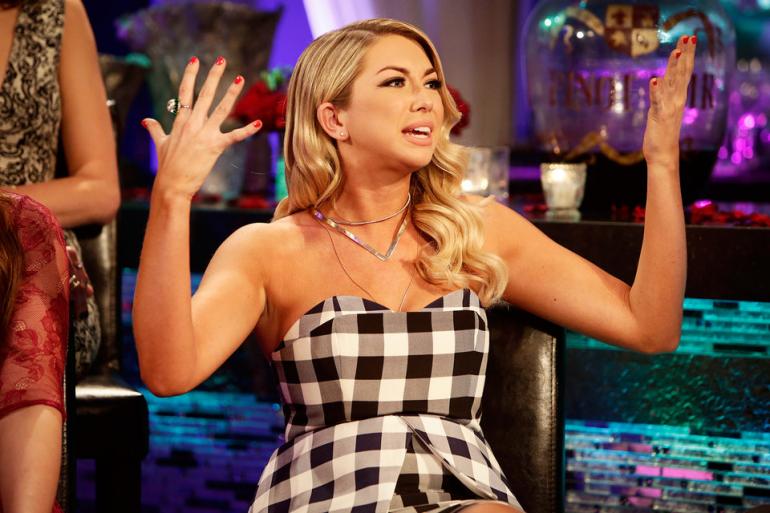 WHOAH!!!!! It came to light last season that Stassi Schroeder’s ex boyfriend (an unnamed man that she met after dating Jax Taylor) was trying to release a sex tape that Stassi did…alone….aka Stassi is naked and playing with herself in the infamous tape. The tape was the source of a lot of resentment for Stassi since Scheana Shay was showing costars and they were watching it.

Anyhow NOW we learn that Stassi’s boss 55-year-old Lisa Vanderpump paid of the ex boyfriend to not release the embarrassing tape after Stassi called her sobbing. In her Bravo blog Lisa drops the bombshell.

“Hold on a second, let’s not get this twisted. Stassi called me sobbing.

I went out on a limb to stop this tape from going public. I then, met the guy and paid him cash. And she wants me to get a contract? Really? We weren’t in a lawyer’s office! I was dealing with some scumbag, on the corner of some scummy street, giving him my hard earned cash. And that’s how she repays me, saying that? That’s Stassi Schroeder.”

Wow!! First of all I think we all need a friend like Lisa Vanderpump who will pay off an ex should they emerge with a sex tape in hand, secondly wow! So apparently Stassi was having some entitlement issues (which she has been having for 4 seasons of the show) and expected Lisa to get a contract with the ex.

I certainly can’t blame Stassi for wanting a legal contract, but as they say “girls with sex tapes can’t be choosers”. Although without a contract all they probably did was postpone the eventual release of said tape, but by then Stassi won’t be a liability to Lisa. Lisa is above all else, a business woman after all — protecting her valuable assets.

Apparently Stassi Schroeder also begged for her job back on Vanderpump Rules.