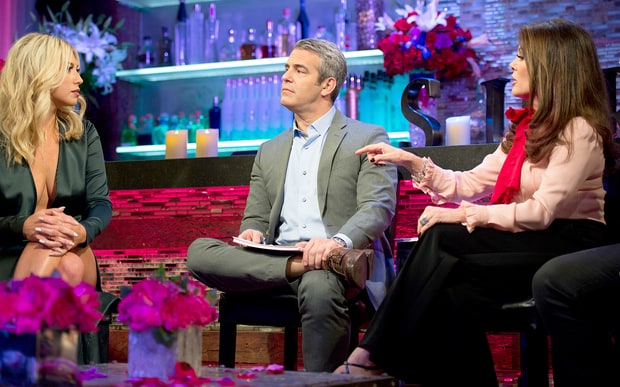 Part 2 of season 4 Vanderpump Rules reunion/Survivor aired Monday night on Bravo and the cast continued to hash out a bevy of the season’s biggest situations and continued to bash one another over their alleged improprieties and indiscretions, and continued to try and remain relevant to America.

The first situation to be addressed was Stassi Schroeder.

Stassi Schroeder makes her season 4 Reunion debut and gets another chance to wear green “the apology color” and beg forgiveness and plead for her 6 figure job back from co-workers and boss 55-year-old restaurateur/West Hollywood Madame Lisa Vanderpump.

But first Stassi gets the party started by lashing out at 23-year-old brash, bratty British DJ James Kennedy for how he treated women on the show. I suspect, again, in this game of VP Rules/Survivor, Stassi is actually trying to ingratiate herself with her other castmates and the best way to do that is to take down James Kennedy.

Stassi is a genius at ‘how to make friends and manipulate people’ and she knows her best asset is her acerbic wit.

So she shows her ex friends that she has something to offer them. It’s a peace offering of sorts.

Taking down James works 2 ways…she is defending new BFF/”weakest link” Kristen Doute, while going after the enemy of the OG crew who can not stand James. In other words, it’s brilliant.

Stassi is a lot like boss Lisa Bobby Fischer Vanderpump. She is always thinking 10 moves ahead of everyone else.

But that’s also the problem. Stassi can manipulate everyone on the cast but Lisa Bobby Fischer Vanderpump.

So Stassi did not have much success in that apology department. It seems that Lisa just likes to watch Stassi grovel but has absolutely no intention of ever forgiving her. I think the master manipulator takes pleasure in manipulating the resident puppet master.

That said, Lisa is a business woman and has every intention of squeezing every last drop of reality gold from the 27-year-old fashionista.

Lisa continues to grill Stassi in front of all of America.

‘I begged you not to walk away from all the opportunities,’ (referring to the multiple times Stassi has walked away from the show).

‘As soon as the cameras were on you, you trashed me again,’ said Lisa. Not only did she “trash” her, she called her “an old woman”.

‘I think, if there wasn’t this show, none of you would have ever heard from Stassi Schroeder ever again …How about that?’

Tom and Jax lay in to Stassi as well. Jax accuses Stassi of being strategic in her timing — suggesting she was broke and homeless, and Tom Sandoval accused her of being phony and ‘manipulative’.

But on a positive note Stassi looked fabulous on the last leg of her “apology tour”. The boobs were everywhere on Monday night!!!

There was front boob, side boob, top boob, bottom boob–pretty much every boob imaginable!

In fact, ironically Lala Kent was the only one covered up on the show. Stassi was showing off her breast lift and Scheana Shay and Kristen Doute were just showing us what they had all along by donning the worlds most plunging necklines.

And then there is Brittany Cartwright.

Brittany joins the crew showcasing her new DDD boob job compliments of boyfriend Jax Taylor. I think that was Jax’ way of apologizing to her for getting arrested in Hawaii so they were the “apology boobs”.

‘I got the boobs I wanted since middle school,’ Brittany claims.

Way to go Brittany! Do not leave your relationship with Jax Taylor empty handed!

Host Andy Cohen asks her if she ever Googled Jax. Shockingly Brittany had no clue who Jax was when she met him. So Andy digs in and asks her about Jax flirting with Lala.

Brittany admitted that the footage of Jax flirting with hostess Lala Kent made her ‘very mad’.

Andy asked if Brittany would have moved in with Jax had she known he had been arrested 5 times.

“Probably not”, she replies.

‘He’s got a lot of growing to do,’ Brittany continued.

Shockingly Jax claimed that Brittany had changed his mind about marriage.

Andy addresses the TomKat situation. I gotta say I am not sold on Tom’s assertion that he and Katie are better than ever. In fact I hate to say this, but I have a sneaking suspicion Lisa Vanderpump orchestrated the engagement and Tom is just excited that the proposal made him look straight.

Not to mention Schwartz is still under the spell that Lisa put on him to chop chop and put a ring on it in time for season 4. (I am still convinced Lisa has voodoo dolls of all of her VP Rules stars). I am also still convinced that Tom Schwartz is gay…at least a little bit gay…maybe 50% gay? I’d say there is also a 50% chance TomKat will not make it to the altar.

Ariana, who in the past has always appeared as the voice of reason in this crew finally breaks.

She lashes out at exBFF, but still sort of BFF Scheana Shay….obviously not over the texting her mom sitch. Ariana is an Enneagram One and no one holds a grudge like an Uno.

Ariana breaks down and yells,

‘It’s the most toxic environment I’ve ever witnessed in my life, how you guys don’t see that blows my mind. It’s toxic as f***.’

Ummmmmm, did she forget who she is dating?

Tom is especially angry on the Reunion this season for some reason. But I think the real reason he’s angry is because he is upset that Kristen Doute with the help of Miami Girl aka Annemarie Kunkel revealed to the entire world that Tom has a tiny penis — 4 inches to be exact. And Stassi Schroeder returned this season to make Kristen relevant again which is why Tom is lashing out at the two as a pair.

Next week Andy we get to find out why Lisa Vanderpump was in a back alley paying $900 for a sex tape.