Some sad and totally unsurprising news for fans of Vanderpump Rules, Katie Maloney and husband Tom Schwartz have decided to call it quits and file for divorce after 12 years of fighting and getting back together on the show. I can’t say I didn’t see this coming years ago.

Let’s be honest, the TomKat pairing was awkward at best. We all knew who wore the pants in that relationship.

For one it did not bode well that Tom lost not one but TWO marriage licenses! After their first epic $50,000 wedding immersed in woodsy elegance, the couple decided to get married a second time in Las Vegas because Tom lost the first marriage certificate. 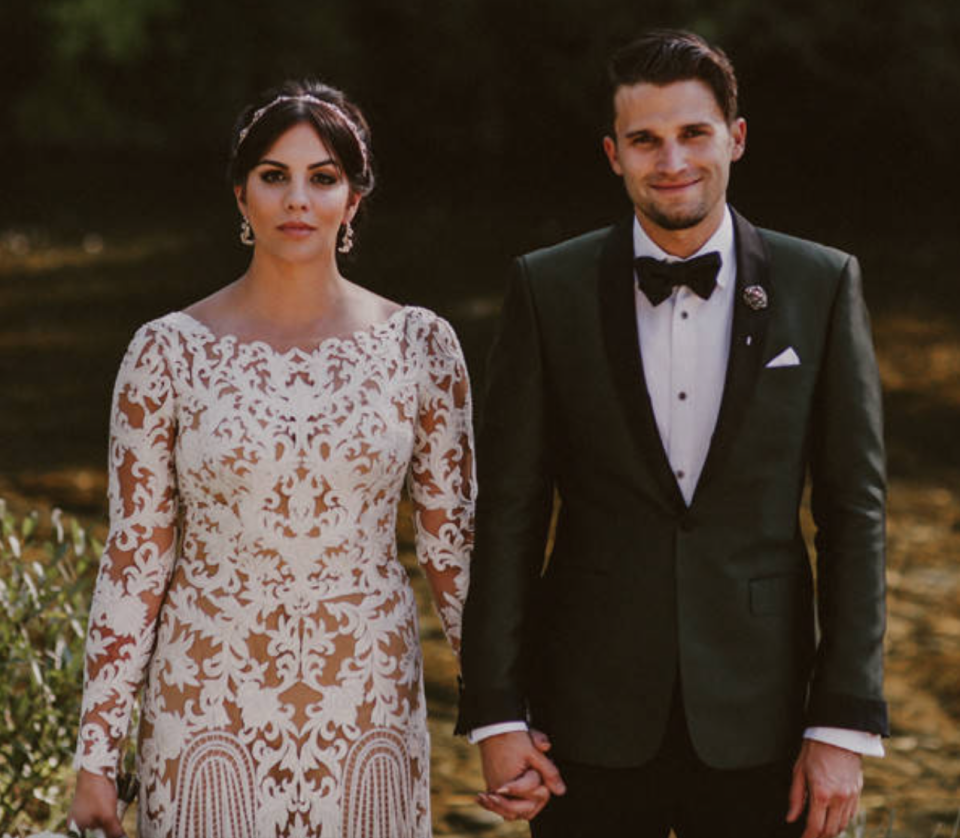 It did not bode well that Tom did not try that hard to get his family to the wedding. It didn’t bode well that the two were in a sexless relationship BEFORE getting married. And lest not forget, Tom did cheat on Katie.

So what the heck happened to finally end this fragile wedded bliss?

Did Katie get tired of telling the 39-year-old bar owner to grow up? Or to grow some balls and stand up to his annoying business partner Tom Sandoval?

Was ‘Schwartz and Sandy’s’ just too much for her to stomach? Did Katie get tired of begging for sex?

Did Tom finally decide that he is ready to come out of the closet?

“Speaking of “gay”, the clip also shows pals Tom Schwartz and Tom Sandoval entering the tiny hotel room that they will share with Jax. The room only has one bed. Sandoval is outraged since he knows that 3 guys in a bed means someone has to spoon and be spooned, but Tom Schwartz is unphased by the situation and actually insists that he and Jax spoon on the bed.”

“I am also still convinced that Tom Schwartz is gay…at least a little bit gay…maybe 50% gay? I’d say there is also a 50% chance TomKat will not make it to the altar.”

Well, we don’t yet know EXACTLY what happened, but as I said before, the writing was on the wall.

On the March 16 episode of the Your Going to Love Me podcast, Katie gave us a tiny bit of insight into what caused the breakup.

“There were so many happy moments, even day to day. I love being with him, but ultimately, I was just not fulfilled,” Katie said. “There’s other things that maybe one day I can talk about, but I don’t really want to get into all that at the moment.”

“There wasn’t some kind of crazy incident that happened, there wasn’t some crazy fight that resulted in this,” ….., “For months it was building up. I felt disconnected. I felt like I was drifted away further and further away.”

She continued, “The best and only way I can describe it is just like waking up inside of my life and having this voice that just became louder and louder and just events in my life and our relationship coming into focus and feeling the weight of them on me.”

“I wanted to deny them,” …… “I wanted to push them out of my head because I love Tom and we have built a life together, and he’s my person and I wanted to be him with forever. But ultimately I just wasn’t happy.”

The couple are still living together in the 2 million dollar home they purchased in the Valley and still friends.

“We do still live together in our house, and we’re just trying to navigate these steps together and really work on becoming friends in that sense,” she said. “And obviously we have the same friends and [are] trying to hang out in a group together going through this and not making it awkward for anyone and not make anyone choose sides—that’s been important to us.” 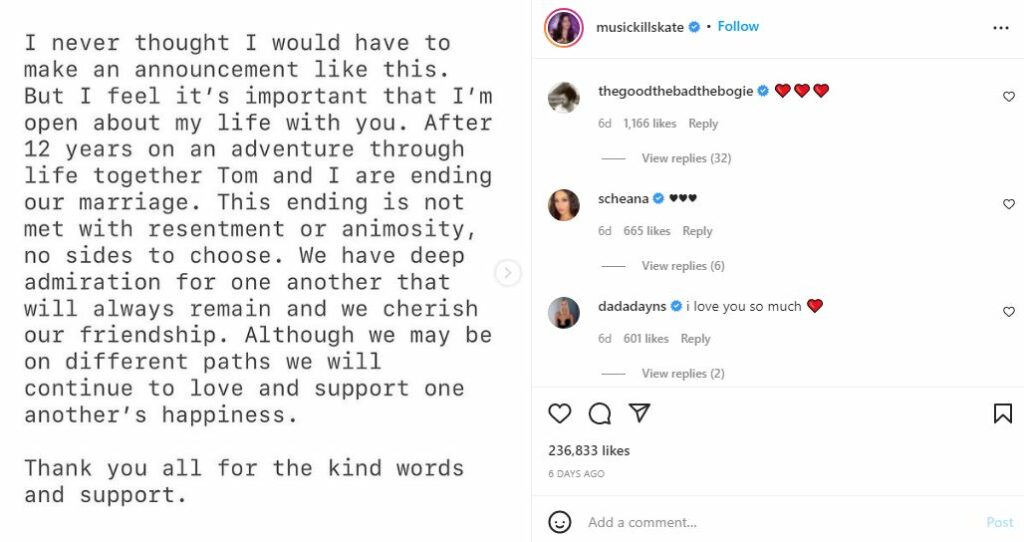 And in Katie’s Instagram post, she wrote, “After 12 years on an adventure through our life together Tom and I are ending our marriage. This ending is not met with resentment or animosity, no sides to choose.”

Tom posted, “As sad as I am, still happy to say there’s no anger or bitterness,” adding, “I don’t think we were ever a model couple. Maybe we are model divorcées.”