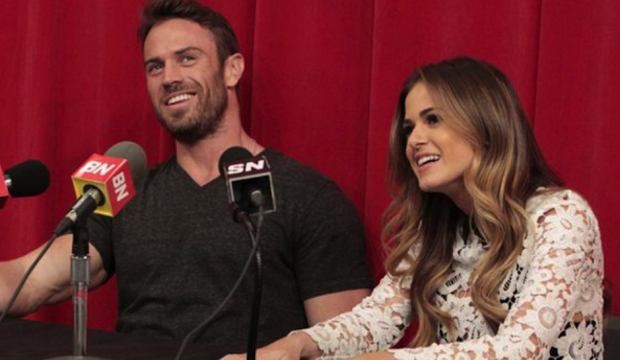 Tonight was historic on The Bachelorette. It was the first time in history that we got to see the Kraft Foods services spread at the mansion. For years we have wondered how the hostages–I mean men are actually fed during their 9-week journey….like does ABC provide the food or are they hauled off to restaurants in white vans with a per diem? Seriously, we have always wondered.

Yes, it’s true. You will never see chewing of any kind on The Bachelor or Bachelorette. But that ALL changed tonight.

As the camera crew followed contestant Chad Johnson of Tulsa, Oklahoma around the mansion we saw him shove endless amounts of lunchmeats and finger-foods from the Kraft Foods buffet table in his mouth WHILE he verbally assaulted the other gentlemen.

We learned a lot about Chad tonight. In fact I was laughing when after the show my good friend Sarah texted me:

“Reply to me about my boyfriend Chad”. I thought…’was she watching the same episode?’ Yep Sarah has a little crush on Chad—for real. So despite his performance tonight there are some women out there that find him charming.

Anyhoo, what did we learn about Chad tonight?

1. First of all we learned that his mother sadly passed away from cancer 6 months ago. 2. Secondly, we learned that his last girlfriend was 4 years ago.

I am guessing that Tulsa is running out of women who have not heard of Chad.

3. We learned that he used one of his two allotted suitcases to bring protein powder and a weight belt.

4. AND that he used said suitcase as a weight which he hangs off of his waist with said weight belt, to do pull-ups.

5. He does not understand sarcasm….or humor.

During the ESPN group date with SportsNation hosts Marcellus Wiley and Max Kellerman with Jordan, Christian, Nick, James T., and Alex, Chad gets his panties in a wad when he and the other guys are forced to creatively propose to Jojo after spinning around with their heads on a bat.

Chad says, “I think you’re amazing, but I barely know you and the idea of getting married to you tomorrow is weird to me.” Whaaaaat???

Chad lashes out…. “They don’t understand this is a real girl” and then demonstrates how a real man proposes to a “real girl” saying, “Will you marry me?”

JoJo shockingly is not super impressed and asks Chad if he can expand on the brief proposition. He replies by claiming that she is getting “a little naggy.”

6. He may be overcompensating for something.

Yes, Jojo astutely proclaims that Chad seems like he may have some insecurities and might be compensating for something. But God only knows what. If only she can get him to the Fantasy Suites she may be able to find out.

7. And finally, we learned that Chad may have an anger management problem.

Alex confronts Chad about stalking Jojo and creeping out on her and Chad replies that if he keeps this up he’s “going to lose (his) damn teeth.”

Seriously, Chad is intense. Jojo shockingly chooses to give Chad a rose for some reason (producers begged her to keep him for at least 4 episodes). It’s pretty obvious that Jojo is horrified and would no way in hell give Chad her final rose, but is trying to feign a semblance of interest in the 28-year-old luxury realtor for the sake of reality television.

But don’t worry Bachelor Nation. If Chad does not make it to the end for some strange reason, Mike Fleiss has promised us that Chad will be sent to Bachelor in Paradise.

Insider claims Chad Johnson is 'known in Tulsa as an arrogant, narcissistic wanna be'