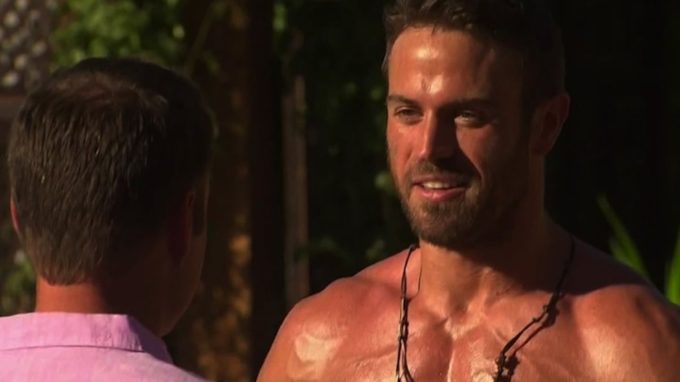 It looks like 28-year-old Tulsa, Oklahoma Bachelorette contestant Chad Johnson will become a serious situation this season of the show and ABC is going to have to hire extra security …… and build a safe room for the other contestants.

According to Chad’s bio he is a “former marine” and a “luxury real estate investor” but I was just contacted by an insider that knows Chad who claims Chad is not the perfect catch that he appears to be.

“Chad wasn’t even in the military,  he dropped out in basic training. He still lives in his dad’s house in Jenks, to say he’s an “investor” is a joke. He does not own a single property and had only had his license as an agent for a few months.

His body can be credited to smoking a pack of cigarettes a day, drinking every morning and taking steroids. He’s known in Tulsa as an arrogant, narcissistic wanna be that no one will date.  That’s why he went on the show.”

Wow!! How amazing would it be if Chad got a Hometown and it was in his dad’s basement?

Ok, so not exactly a glowing endorsement. I guess we can add him to the list of douchebags on this season for all the wrong reasons. The list is sadly getting longer by the day!

Evan Bass calls out Chad Johnson for alleged steroid use

6 thoughts on “Insider claims Chad Johnson is ‘known in Tulsa as an arrogant, narcissistic wanna be’”