The Bachelorette episode 6: Kisses, tears, and lots of dude drama 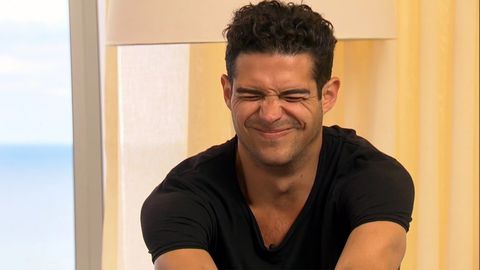 Wow, tonight things really started to unravel on The Bachelorette as Jojo Fletcher and her guys landed in Buenos Aires, Argentina.

My friend Leslie put it perfectly when she said “Jojo is running an HR company”. She is right! We haven’t seen grilling like this since Emily Maynard’s season of The Bachelorette! (Remember when Emily relentlessly grilled her suitors with obscure hypothetical situations and then didn’t accept their answers?)

So Jojo starts by delivering a one-on-one date card to Wells Adams ordering him to kiss her “Besame, muchacho” aka “chop chop and Kiss me, dude.”

No pressure! Poor Wells is finally starting to “get there” with Jojo after 5 weeks of thinking the whole idea of finding a life partner in 9 weeks on national television with a girl who is dating 24 other guys at the same time was ridiculous —- and Jojo dumps him.

But not before doing some modern dance in a levitating pool on the Fuerza Bruta stage where neurotic Wells finally works up the courage to plant one on Jojo.

And not before Jojo grills Wells about his ex girlfriend and why things didn’t work out.

Wells tells Jojo that after 4 years he and his ex were more like “best friends” and decided to go their separate ways. After pouring out his heart to Jojo about his insecurities surrounding finding lasting love she delivers the bad news to him that she can not give him the rose.

Next there was a group date with Luke Pell, Robby Hayes, Alex Woytkiw, Jordan Rodgers and James Taylor, and another sports group date none-the-less — allowing Jordan to display his professional athletic skills….just in case you did not know what a talented athlete Jordan was. But apparently behind the scenes Jordan is displaying some signs of entitlement.

As a side note…I’m not sure it’s totally fair to blame Jordan since producers did recruit him to be on the show aka he never applied. I am guessing they had to sweeten the deal to get a stud like Jordan to agree to do The Bachelorette.

I can’t imagine the scenario is really his cup of tea. So I am imagining some promises like “hey, we will give you a good edit and make sure you are on all of the sports dates. If you wanna take a break, take a break, whatev.” So lo and behold Jordan has entitlement issues.

By the way, my favorite line from the episode came from Jojo when she said….

“Today was a good time for me to focus on each of my relationships”…of course the line reminds us that Jojo is dating multiple men simultaneously as she grills them about whether or not they are serious about her.

So James Taylor is throwing Jordan under The Bachelorette bus saying “Jordan acted like he was the end all be all”. Then James tells Jojo that Jordan is just on the show for fame— feeding her existing insecurities about Jordan.

So this necessitates another sit down grilling with Jordan.

But once again Jordan reassures Jojo that he “can get there” by the end of this. Haha!

Jordan is angry that James is trying to sabotage him, but he seems even angrier that James broke bro code…suggesting the claims are likely true.

Then on to the world’s most awkward two-on-one date in history with Derek Peth and Chase McNary where the three danced the tango and the two suitors awkwardly passed Jojo back and forth.

Poor Derek. So handsome, so sensitive, so toast.

Derek doesn’t really seem cut out to date a girl that’s dating other guys, but not to worry, he’s a shoe-win for BiP.

Interestingly Jojo pulls Chase aside to tell him that she needs more from him. She basically says “look I need to see some more emotions from you. I need to know that you are in this to get engaged in 3 weeks and if not tell me so I can just cut you now.”

The sit-down takes Chase (and me) by surprise, but he seems down to step up and start emoting and reassuring her that his feelings are fo’ real.

Jojo decides to cut Derek providing one of the shows most amazing and dramatic limo scene exits with Derek crying to the soundtrack of “Don’t Cry For Me, Argentina.”

That’s right, after Jojo walks Derek out she and Chase walk into a gorgeous ballroom to find Soledad Pastrami singing the very famous song from a balcony.

The Rose Ceremony was amazing. First of all I am so glad to see that host Chris Harrison is back to wearing a tie. I think it was last week that Chris showed up tieless and untucked and things were just getting way too casual for me. But not last night.

The final rose came down to James Taylor and Alex. Jojo ran off stage for a chat with CBH saying she could not hand out her final rose. The interaction led us to think that BOTH men were toast but touché, Jojo decides to keep both.

You would have thought James and Alex would be thrilled but Alex was angry that he was getting what he called….”a pity rose”.