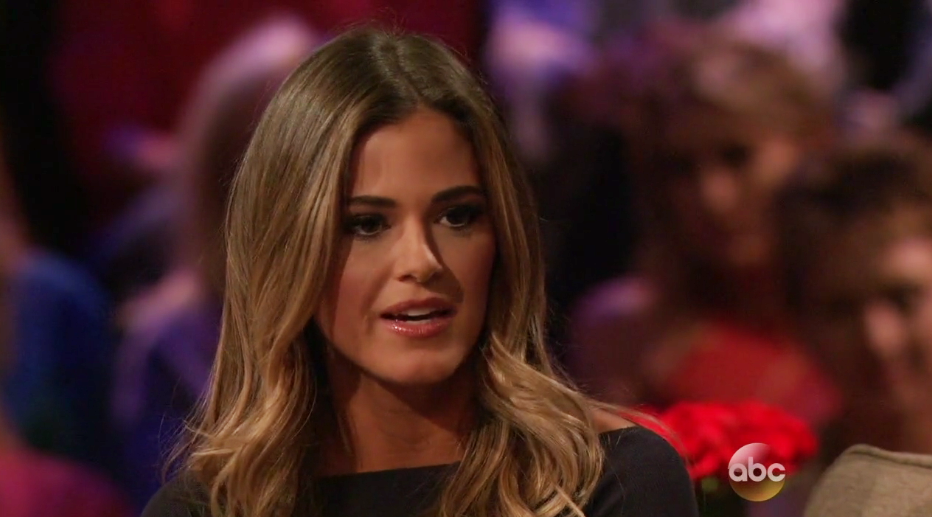 Monday night’s episode of The Bachelorette was a rollercoaster. First Jojo Fletcher and her remaining suitors rejoiced after sending tormentor Chad Rookstool packing once and for all.

Then she and the crew headed to to Punta del Este, Uruguay where Jojo finally got some one on one time with front-runner Jordan Rodgers. It was clear that Jojo is seriously in to Jordan, but she does have some reservations since she spoke to one of his ex girlfriends in Dallas (which interestingly means she knew Jordan was on the show before filming).

So she has a heart to heart with Jordan and asks him if he cheated on his ex girlfriend and he said no. Jojo seems satisfied with Jordan’s explanation and returns to her hotel feeling relieved and hopeful…only to be ambushed by producers who present the infamous InTouch article where her ex Chad Rookstool claims that he and Jojo got back together as soon as she returned home from Ben’s season.

In fact Chad makes a slew of damaging allegations against the Bachelorette…suggesting she is only doing the show for fame and to further her career.

Jojo breaks into tears as she reads the claims and comments about what an unhealthy relationship that was.

In regards to why producers decided to address the claims on the show Chris Harrison explained the situation,

“JoJo’s ex-boyfriend Chad decided to “tell all” to a magazine. Normally, we wouldn’t pay this any mind, but in this case, the claims were so extreme that they called the entire nature of JoJo’s journey into question. One of the guys read the magazine and news sure spread fast. Of course, the men were incredibly supportive and just assumed that this was a jealous ex trying to get his 15 minutes of fame, but we thought it was important for JoJo to know the rumors that were spreading. Just like she addressed the rumors with Jordan, she decided to address the rumors about herself with the rest of the men. I think it was easy to see that JoJo was hurt that someone from her past would do this to her. I don’t want to speak for JoJo, but we are confident that she’s is in this for the right reasons and we won’t let rumors stop her from continuing her quest to find the love of her life.”

To back up a minute earlier that day the guys went to get haircuts and some gossip mags were laying around and one of the guys discovered the story and reads it to everyone. Understandably the guys are shocked and very concerned about the claims.

Jojo meets with her guys and reassures them that the claims are totally false and she is there for the right reasons. I’m sure it helps that she is bawling as she is explaining news. The guys quickly decide to believe and support her.

Of course we still don’t know if the guys are there for the right reasons! To be continued…