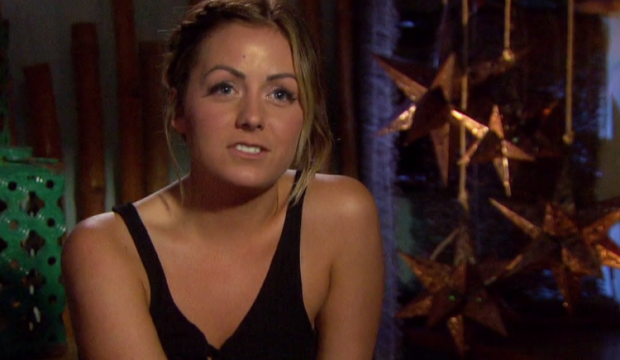 Just when I thought 33-year-old Evan Bass had half of a chance with 30-year-old Carly Waddell…on episode 2 of Bachelor in Paradise the two shared a very awkward kiss that left Evan “exploding” with love and left Carly with PTSD. BUT when Evan offered her a rose on Monday’s rose ceremony she accepted it.

But Carly could not get over how awful their first kiss had been. And unfortunately she decided that she really had NO romantic feelings for Evan at all and even gave the funniest ITM where she claimed she had a problem dating very feminine men, confessing that her first boyfriend now has a boyfriend. Hahaha!

She also claimed that Evan gave her erectile dysfunction. Ouch!!!!

“Evan does give me ED…I think I wanna stay away from Evan today”.

But the next day Carly is unable to evade Evan and he asks her on a dreaded second date where she laments to cameras….

To make matters worse they are forced to engage in a 90 second kiss with habanero in their mouth in an effort to set a world record.

Not only do they set the world record for longest habanero kiss they also set the record for world’s longest spit-stream.

“Why do I always get the f*cked up dates”, Carly bemoans.

“I threw up not just from the pepper…from the kiss”….Ouchhh!

Making matters worse Evan is totally oblivious to the lack of romantic feelings from Carly and is certain that sparks are flying.

Look Evan…if your date has to throw up after you kiss it’s a very bad sign.

So Carly finally “wakes up with that moment of clarity” and decides it’s time to be honest with Evan and “have the talk”. She informs Carly that she doesn’t have feelings for him and just wants to be “friends”. Evan is devastated.

In fact he tells cameras that he has never felt like this for anyone in his entire life—which is saying a lot since he has 2 kids with a woman!

It was hard to watch Evan get so crushed, but hopefully it means both can now focus their attention on more viable prospects.

Carly has her eyes on new arrival Brandon Andreen from Desiree’s season and Evan decides to get in line for Amanda Stanton.