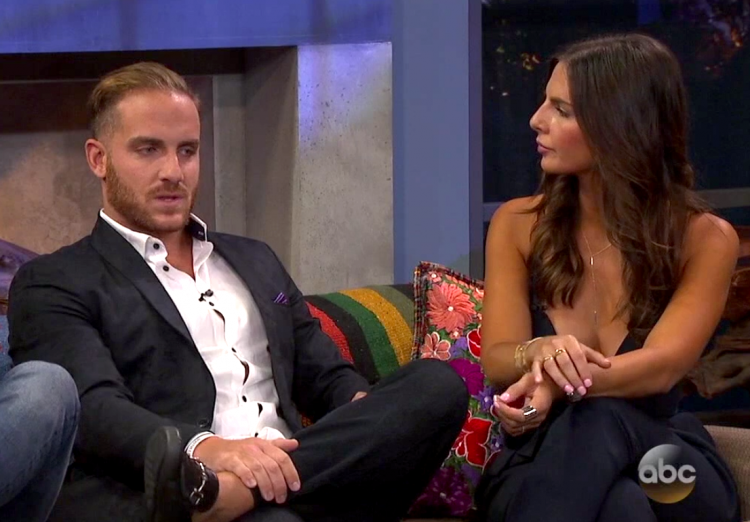 Tuesday night on Bachelor in Paradise the biggest situation to surface was the dissolution of the seemingly rock solid relationship of Izzy Goodkind and Vinny Ventiera!

Goodkind and Ventiera seemed to be the most solid couple of all even planning a future after paradise, but Izzy withdrew from the relationship the minute she set her eyes on ‘lamp guy’. That’s right. Isabel decided that Brett Melnick aka ‘Lamp Guy’ from Andi Dorfman’s season was her soulmate.

And just to make things even more uncomfortable the 25-year-old graphic designer had to come face to face with the 28-year-old Barber on After Paradise on Tuesday, August 23rd and explain her rash behavior.

The about-face was particularly shocking considering that Goodkind presented herself as the anti-Bachelor contestant…as in the girl that was looking for authenticity and substance…certainly not the girl that would judge a man solely on appearances. But ‘looks’ can be deceiving, because Goodkind turned out to be just as vapid and superficial as any other contestant.

On After Paradise she said,

“I had an amazing relationship with Vinny, and it was 100 percent real. In the short time that we were there, though, I felt this overwhelming sense of doubt and insecurity, not only [about] myself but with my relationship with Vinny,” ……. “I wasn’t able to express those things to him in the time that I hoped, and then when Brett walked in, it seemed as if it was solely my physical attraction with him that led me to the decision that I did, and unfortunately there was more to that, but I didn’t get to express those things.”

“We hit it off the first night. We were very physically, sexually attracted to each other,” she said. “But we didn’t really ever have certain conversations about our family life, our home life, growing up, those sorts of things, which I think are a great foundation to any relationship. That was something we had been missing.”

She went on to apologize,

“I want to apologize immensely from the bottom of my heart. I never intended to hurt you,” she said. “You’re an amazing man.”

Ventiera accepted the apology, but contended any hopes for getting back together were smashed. “Izzy’s a great person. We got along great, but the way that she handled that situation — what’s stopping something like that from happening in the future?” Ventiera said. “I don’t want someone to walk by, catch her interest and all of a sudden, she wants to be with him.”

So as to the question do Izzy Goodkind and Vinny Ventiera get back together?

The answer is sadly, no.