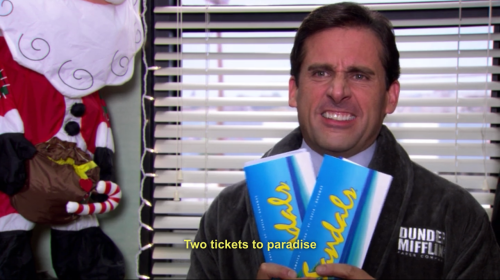 If there is one thing The Bachelor is brilliant at — it’s creating a habitat to help human beings fall in love.

It’s about a handwritten card from Chris Harrison and a custom made Fantasy Suite key and that impulsive decision to “forgo your individual rooms and stay as a couple in a Fantasy Suite”.

It’s about a private beach that can only be reached via helicopter. It’s about authenticity and spontaneity and most importantly it’s about really good lighting.

It is certainly not about an “all inclusive package” or a tiny overcrowded fenced in beach with monogrammed towels and screaming children. It’s not about pre-planned packaged activities or all-you-can-eat buffets.

The Bachelor brand is all about subtlety, not copious and repetitive product placement.

So I have been confounded and distraught lately at the pervasiveness of the uber-80’s Sandals resort on the show and ESPECIALLY on the very, very important show finale. On the epic finale of Ben Higgins season of The Bachelor the proposal took place at a Sandals Resort!!!!!

The proposal was certainly uber-romantic and picturesque but Sandals, ABC??!!! Sandals?

ABC has taken product placement to a WHOLE NEW LEVEL! Is that really where we are at now in 2016? 1987? I’m just not sure the decision to suggest The Bachelor experience is equivalent to the Sandals experience is a smart marketing move.

And now Sandals is riding this money train to the bank in a serious way with the new ‘Beyond the Rose’ package, where the resort will recreate Ben and Lauren’s final dates before the proposal.

I don’t even know where to begin with “Sandals”…

They were popular for a few minutes in the late 80s and 90s until people actually went to a Sandals resort and told all of their friends about it.

Let’s just say it’s sorted of “dated”. I mean their theme song is. “I had the time of my life/no I never felt this way before…” ….from Dirty Dancing circa 1987 and EVERYthing about Sandals screams 1987.

And the ubiquitous logo that you can not escape from! I mean it’s even printed on the bottom of their pool for the love of God!!! Not so subtle. I don’t know. I’m just a bit taken aback by ABCs decision to associate the illustrious high-end Bachelor brand with a brand that has transcended pop culture into a giant cliche, a brand that has actually become a parody of a romantic experience.

It was even spoofed on The Office because everyone knows Sandals is the vacation destination of people that have no imagination.

I found this absolutely hilarious commentary on Sandals! I have no idea who wrote this, but it’s brilliant.

“Well, Sandals Resorts Marketing Executives, all I can say is that as I watched this ad I kept waiting to see if it was going to turn out to be some kind of parody. Your ads have always seemed a little, well, extreme-romance-novel-cover to me, but this one somehow crossed the border from escapist fantasy to reality-denial bugfuck crazy land.

Now, I’d like to point out that I am not shilling for anyone here. I do not know anyone currently in the advertising business; I have never worked in the advertising business; I am not posting this at the behest of some aggravated creative over on the Sandals account somewhere. I am only an observer—an observer who has had to endure the painful agony of watching endless Sandals Resorts television commercials.

When I first saw the ad which launched this tirade today I Tweeted my displeasure and blamed the agency, but on reflection I have decided this is unfair. No, I believe this marketing debacle belongs at the feet of the Sandals employees with decision-making responsibility for the corporate message, possibly going as high up as the CEO, for it is highly unlikely that any decent creative has not figured out just how dated the Sandals brand has become. But change is not easy for people, let alone institutions, and I would guess that any discussion of this has only involved “tweaking;” unfortunate, for this is the time for a sledgehammer.”

I am trying hard not to cut and paste the entire article because it’s freaking awesome, but please click the link and read the rest and perhaps you will understand my confusion as to why ABC has decided to immerse itself into the Sandals brand….

It is a situation of global proportions for sure.