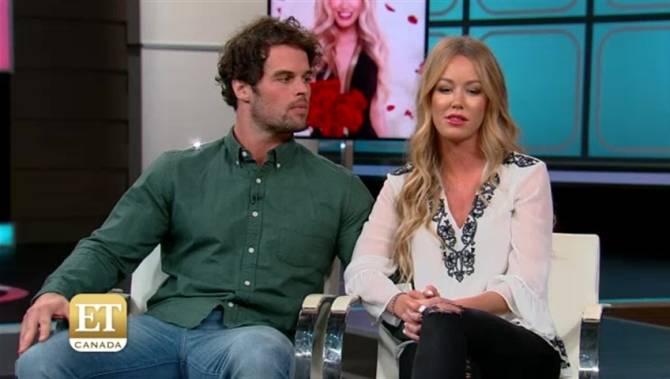 Bachelorette Jasmine Lorimer and her fiancee Firefighter Kevin Wendt have emerged from hiding to declare that despite how grave things looked on After the Final Rose, they are in fact still together!

So we can all breath a huge sigh of relief—maybe.

Anyhow they came out of their shell today and spoke with ET Canada’s Roz Weston who grilled them on their bizarre behavior, namely on their abrupt decision to cancel all of their press interviews after the finale.

The couple said they simply needed a break.

ET shared a clip of tonight’s interview that will air at 7:30PM. And I love how irritated host Roz appears to be as he grills them about their unconventional silence and their duty to share the details of their fledgling relationship with the world. (It’s in their contract!)

“This is normally the time we see pictures of you all over the press. There has been nothing from you. You cancelled all the press. What happened?”

“It was hard to go through that evening. The finale is supposed to be a really positive time but its emotional for us and the reactions from people made it really hard and we realized that we just really needed time to connect with each other and disconnect from everything else…..we just need a little bit of time…and the past week of taking a break has been the best week for us”.

Roz continues, “you know that after that happens though, there’s no tweeting, there’s no pictures on social media together, there’s no anything we assume it’s over.”

Kevin interjects, “for me personally I didn’t think I was gonna take so hard negativity from social media because I’m just a regular guy. I went on a show. I happened to meet the girl of my dreams. I just let my self go on the show. I was very real on the show. You only saw a glimpse of what happened. There’s so much more that went on between us that no one ever saw.”

I’m sort of wondering how much goading and therapy with Producers happened behind the scenes to make this interview happen. We have so much riding on you Jasmine and Kevin! You have a contractual duty to stay together at least until the holidays are over and everyone has forgotten who you are.

Jasmine admitted on the “After The Final Rose” special that she still had feelings for the show’s runner up, Mikhel Sickand. She also conceded that things had been rough with Kevin.

Since then there have even been rumors that Kevin was cheating on Bumble, but still no confirmations. If anyone has any deets please email me. I will keep your info confidential.

Stay tuned for more in this continuing saga.