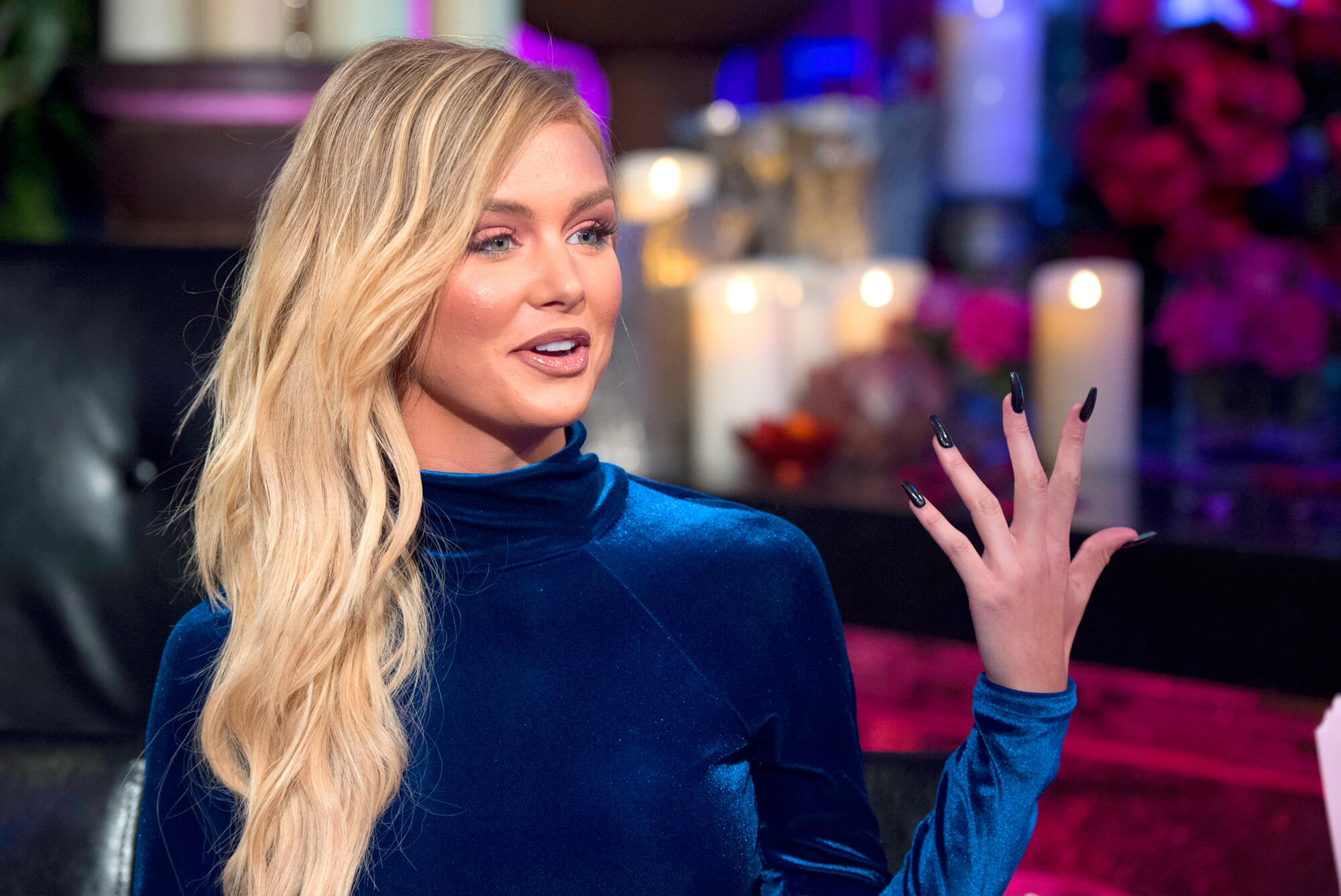 Twenty-five-year-old Lala Kent officially left Vanderpump Rules on episode 5 filmed this past July after being mercilessly grilled by her co-stars about her new mystery boyfriend.

Katie Maloney and Scheana Shay suspected Lala was selling some of her sugar as soon as she began working at SUR last year when she suddenly had to leave to go on an all expense paid modeling trip to Italy. And last season she told us that she was still sort of engaged in a long distance relationship with her ex boyfriend Hayes Pullard (who lives in Jacksonville, Florida) despite striking up a romance with James Kennedy.

But this season there is a new mystery man. At first I thought she had gotten back together with Hayes and was trying to keep it on the down low which prompted rumors, but when Stassi claimed the ex wife found sex tapes on her boyfriend’s phone the married man thing seemed a little more likely. Not to mention the cast claim they have heard the rumor from numerous different sources…aka the evidence is mounting.

Additionally when Lala offered to drum up a private jet for the cast to take a trip I said…ohhhh thats it. This is a BIG daddy, way bigger than Hayes and his 500k salary. This is some serious sugar.

Lala did also give us a clue saying that he was a really big name in Hollywood. So this has turned in to that sort of situation. But it appears that whoever the mystery man is, Lala does have real feelings for him—married or not.

Yesterday she told Us magazine,

“I have a boyfriend who I’m madly in love with and this married man rumor that who knows where the f–k they pulled this out, whose ass it came out of, it’s just not worth it to me in any way shape or form”….“I feel like my personal life is meant to be personal and I don’t have to share everything, even though they want to call it a reality TV show, this s–t is not real.”

Well Lala, unfortunately when you sign a contract to star on Vanderpump Rules, your ‘personal life’ is the property of Lisa Vanderpump.

Interestingly she told Us that she tried to quit earlier, but was not ‘permitted’ to quit.

“[I tried to quit] during the very first episode that everyone saw. … I tried to leave. That’s why in one of the clips my dress is unzipped. I took my mic off and told them I was done and then something went on and then I tried to leave 3 other times, but they wouldn’t let me,” she explains. “So my exit was the day before the 4th of July. I got in my car, my Range Rover, that apparently was paid for by some man who I’ve never heard about or seen in my life. I jumped in my Range Rover and drove 10 hours to Utah and my mom turned my phone off so no one could get ahold of me. … I basically started fresh when I got back to LA.”

I’m guessing Lala broke her contract and we may hear more about this situation from Producer Lisa Vanderpump. Her Sugar Daddy may have to cough up some sugar to help her out of that mess.

Anyhow, despite the bad experience Lala is still open to reality TV.

“If someone were to come to me tomorrow and say we want to give you your own show or we want to put you on a show where people are on your same level as far as talent and looks and everything else goes, then I would do both of those,” she says. “But Vanderpump Rules I am 110% never going back to that show. You will never see me on Vanderpump Rules. You’ll see me; just not on that show.”