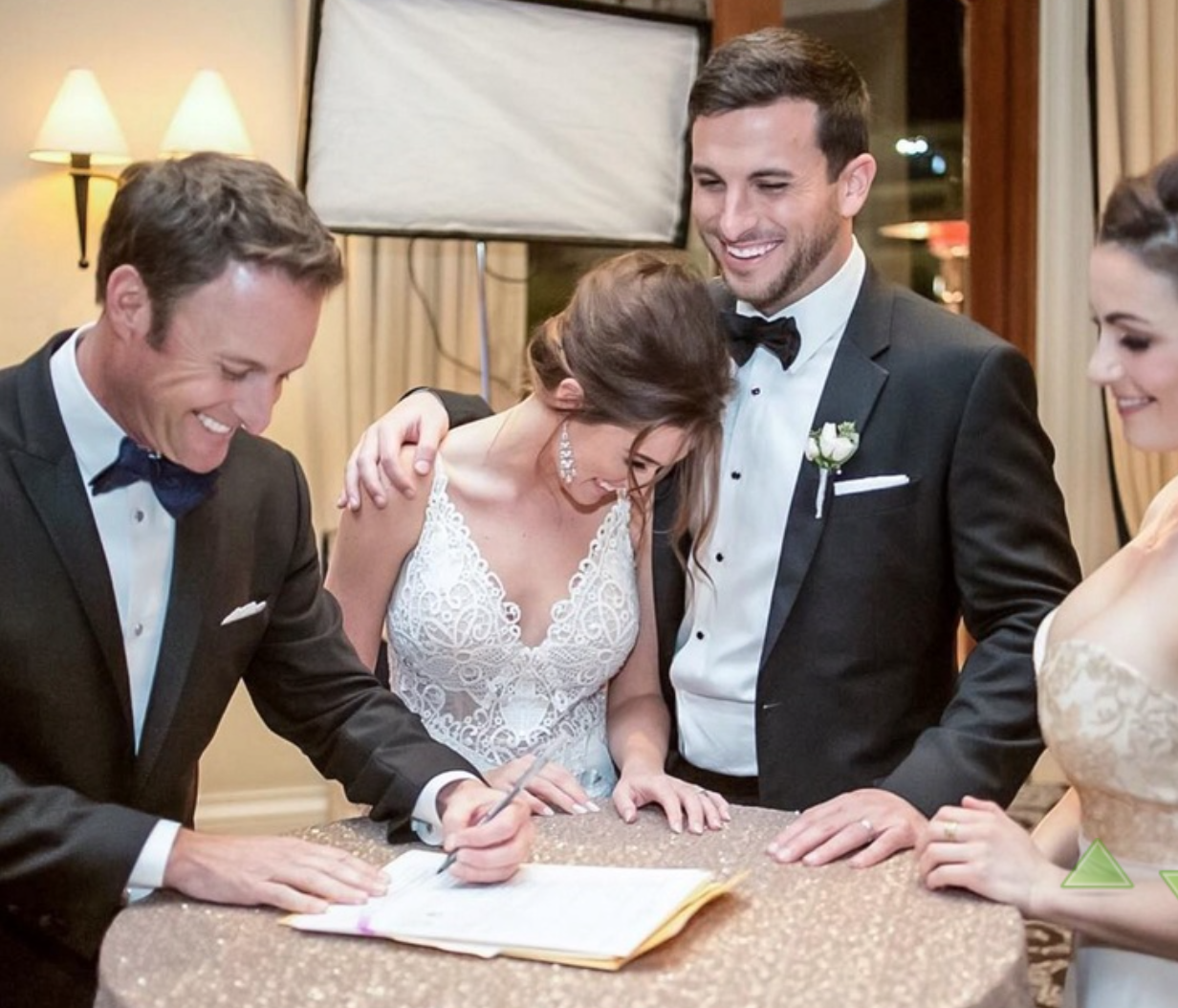 Nick Viall’s season of The Bachelor is fast approaching and one situation he will be confronted with right away is a passed hookup. Yes a girl that Nick had been intimate with at Jade and Tanner’s wedding shows up as a contestant on Nick’s season and things get a little uncomfortable.

Initially Liz plays coy and claims she does not think Nick remembers her.

“I’m kinda glad he didn’t remember we had sex. I like the mystery of it. Hmmmm, lets see.” she says in her ITM.

Needless-to-say nothing is swept under the rug on The Bachelor. If there is an uncomfortable situation looming, it will be addressed. And shockingly it appears that Liz totally ghosted Nick after hooking up with him at Jade and Tanner’s wedding! That’s right. It wasn’t Nick who bailed on her. She bailed on him.

Nick sits down next to her and says, “So…how are you?”

“I’m good, I’m good. I thought that I’d be maybe way more overwhelmed and nervous that I am and I’m not.”

Liz, shockingly, is impressed that he remembers (which worries me since the two did HAVE sex), “Ahhhh, you remember.”

Liz says “I thought that you gave me a weird look…”

Nick then remarks, “And after you said goodbye, I’m like “That’s f***ing Liz.”

Liz tell him, “Honestly, I didn’t want to say anything because…I guess like, I didn’t want you to think I was here because, like, you’re the Bachelor.

Alright, so here’s the situation: Liz was Jade’s maid of honor. The two hooked up the night of the wedding and Liz refused to even give Nick her phone number afterwards!

Nick says, “That’s a fair assumption…You know, I remember being very intrigued by you when we met at the wedding. And you know, we had such a wild and crazy night of…and then I remember like when I kinda asked for your number, and you were like, “Oh, lets just leave it,” and I was like, “Oh ok. Totally respect that, totally cool, but, like it’s kinda like well why haven’t I heard from her since then? You know, it’s been like 9 months. Like, I’m not a big on the whole right reasons thing, but at the same time in fairness, you gotta appreciate like my number is very easy to get for you. Jade has my number.”

Exactly Nick, if Liz were interested she would have called.

Liz sort of wriggles around the fact that she totally just hit and ran saying,

“Well, I don’t think I really wanted to be like ‘Hey, gimmie this person’s number’ or whatever. I truly believed that if we were supposed to cross paths again we would. And I did have a stereotype. I’m not gonna lie. Ummmm, and then I watched ‘Bachelor in Paradise’ this year, and I was like, ‘Wow, this guy seems very self aware’, like maybe way different than what I thought. And you seemed very, kinda knowing who you are and what you want…”

PUHLEASE! I’m not sure why Liz is here, but she is obviously not here for Nick! She didn’t need to go on a national TV show to date him, she just had to CALL him.

Liz remarks in her ITM: “It was hard hearing from him ‘Why haven’t I heard from you’, when I didn’t even think he remembered who I was. I did have the opportunity to reach out to him over the last 9 months, and…I didn’t. And so it’s very hard to know where we stand at this point.”

You didn’t have time to call him but you had time to fill out mountains of paperwork to be on The Bachelor?

You completed the very extensive 1000 question personality test, and 30 page questionnaire, but did not have time to shoot Nick a text saying “hey”?

Anyhow, at this point I am kind of feeling sorry for Nick. It seems like once girls consummate their relationship with him they bail.