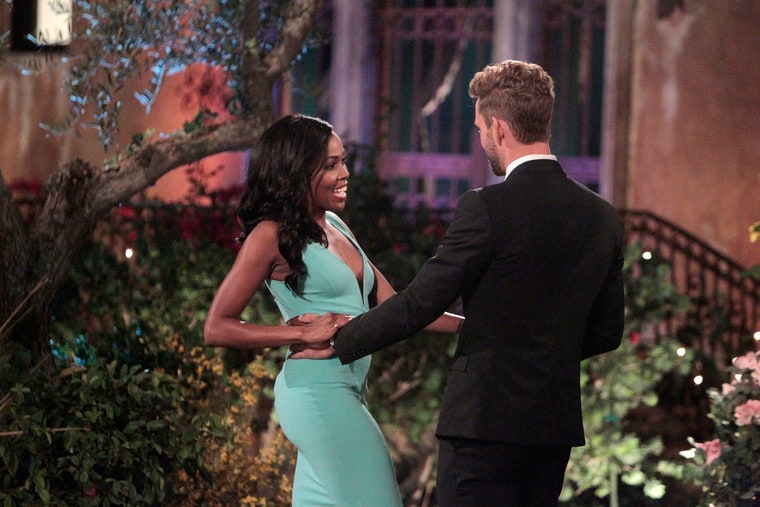 Tonight Nick Viall’s season of The Bachelor premiered with an astounding 30 amazing ladies and some astoundingly suggestive introductions! Yep for some reason ABC gave Bachelor Nick 5 bonus ladies to choose from.

One thing I will say about Nick is he probably wanted this gig more than any Bachelor in history.

Nick has been the Hillary Clinton of Bachelors. Both candidates have been indefatigable, dogged, persistent, and perseverant in their campaigns to lead despite some epic losses and some very embarrassing and demoralizing hot mic / hacking situations.

When the lead role passed him by in 2015 he began a campaign for the 2016 season by flooding social media with attractive Bachelor-esque selfies and by strategically coming in 2nd place on Kaitlyn’s season of The Bachelorette. When being the Bachelor in 2016 eluded him he still did not give up.

Most people would have withdrawn from national television after such an awkward and unseemly showing on Andi’s season, but not Nick. Then fans thought Nick’s hopes of ever being The Bachelor were over when his microphone was ‘hacked’ by producers on Kaitlyn Bristowe’s season — revealing what a lustful man whore he really was when cameras weren’t around, but no. In fact despite the shameful, shameful episode he returned for Bachelor in Paradise with a plan–a plan to find everlasting love?—no no— a plan to repair his reputation and to earn the empathy and affection of America….a plan to show that he was vulnerable and actually wanted to find love, a plan to personally give America a ‘happy ending’. And he succeeded. Nick succeeded in seducing fans into liking him even after dumping Jen Saviano on BiP.

So that’s where we began tonight–with controversial Nick. The new and improved Nick delivers a very well-thought-out victory speech to fellow Bachelors Chris Soules, Sean Lowe, and Ben Higgins. His speech is really about why he deserves this amazing gig.

Then cameras show Nick playing catch with little sister Bella just to try and prove to us that he is not as big as a douche-bag as we all think.

Nick talks about his GIGANTIC family. Yes he is 1 of 11 children which really makes me wonder what is going on with his mom and dad.

If I were a psychologist I would say that coming from such a big family has made Nick feel the need to prove his value.

Now to the ladies….

I apologize, but I can not possibly go over all 30 of these women. So let’s just hit the important points.

25-year-old aspiring model and actress Corinne Olympios from Fort Lauderdale, Florida is obviously going to be a mega-situation. Apparently she runs her fathers multi-million dollar business and lives at home and needs a nanny. Lots of questions here.

Corinne clearly has no interest in dating Nick. I would bet money Corinne is, or soon will become, a Sugar Baby. Anyhow previews show her taking off her top and strategically laying her boobs on Nick. My favorite part of that scene was one girl said “if thats the kind of girl Nicks looking for I’m out of here”. Hahaha!! Thats the kind of girl every guy is looking for!!

Corinne will clearly rub the girls the wrong way by rubbing Nick the right way. The only question is how long will he keep her around.

Alexis Waters emerges from the limo dressed as a shark, but she apparently is not aware that she is wearing a shark outfit and thinks she is wearing a dolphin outfit. I was watching the premiere with my dad who was horrified that this girl did not know the difference between a shark and a dolphin. He said “doesn’t she know dolphins don’t have gills? And where is her blow hole?”. He was very upset and perseverating on this situation listing all of the attributes of a dolphin that were clearly missing here.

Someone FINALLY makes the astute observation that Nick’s last name Viall pronounced “vile” means morally corrupt, which is amazing given how “vile” Nick’s behavior has historically been on the show! The girls name is Lauren Hussey so obviously if they married it would have to be hyphenated Viall-Hussey! Good one Lauren!

A black chick gets the first impression rose….Nick pulls attorney Rachel Lindsay aside to give her the coveted first impression rose. I saw people on Twitter claiming Rachel is the Rosa Parks of The Bachelor. Really? The ‘Rosa Parks’? Aren’t we reading a lot in to this? Like she sat on the couch refusing to leave until she got the FIR? I’m not entirely sure the situations are similar here, but at any rate Nick was hot for Rachel so we know he likes a little flavor.

Speaking of the coveted first impression rose, Vanessa Grimaldi was very upset that she did not get the rose. Vanessa in my opinion is the prettiest girl there and way too good for Nick. She’s from Canada and speaks fluent French even though she is 100% Italian. She works with special needs kids—skills that may help her with these women.

A bunch of chicks wore red dresses for some reason–but don’t expect me to recall which ones.

A Camel steals the show There have been plenty of camel-toes on The Bachelor but never an actual camel. Lacey Mark, 25, made Bachelor history by riding in on a camel and making a joke about how Nick likes ‘humping’. The girls were reeling with jealousy that they did not come up with that salacious intro!

In fact there were lots of very sexual jokes referencing Nick’s rep. One girl made a really risqué joke about not wearing any underwear! We have sunk to new lows Bachelor Nation.

The humor tonight was really lowest common denominator. My dad was also horrified by Josephine Tutman’s intro. She told Nick that he’s a ‘wiener’ in her book; then proceeded to open a book with a raw hot dog inside. She asked Nick, “Do you wanna, like, Lady and the Tramp it?” I’m not entirely sure what the implications were here but it was disturbing.

Which brings us to…

The girls were really into penetrating Nick’s orifices because Brittany, 26, a traveling nurse from Santa Monica, tried to give Nick a rectal exam.

One of the more disturbing intros was Jaimi King, 28, a chef from New Orleans, who told Nick he has balls and so does she. Of course Nick’s jaw dropped with good reason. I mean look I know the world is much more open-minded than it used to be, but I don’t think we are ready to see a Bachelor be blindsided by a transgender contestant. I mean I think it’s just too much for PrimeTime television to turn Fantasy Suites into the Crying Game at this point.

Jaimi then reaches into her nose and pulls down a nose ring. Needless-to-say I think her time will be short-lived. The PTSD can not be undone.

And then there was Liz Sandoz who requires her own post. She emerges from the limo and tells cameras in her ITM, “I’m kinda glad he didn’t remember we had sex.” So many things wrong with that statement.

I don’t mean to sound all pinkies out, but what is going on here?! I am just not sure these ladies deserve the tautly tucked professionalism of Chris Harrison.

This is who is left after episode 1: