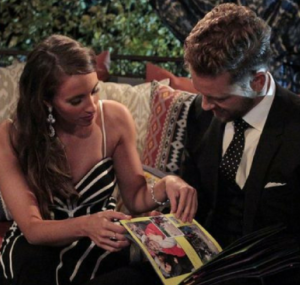 Tonight we saw why ABC chose Nick Viall to be this year’s Bachelor. Despite being terrifically douchey the 36-year-old can cry and profess his undying love after going on only one date with a girl. That’s what happened when he took 29-year-old Special Needs teacher Vanessa Grimaldi to a NASA training center.

The two enjoyed the experience of simulated space by floating in a zero gravity chamber. And despite being in “zero-gravity” the two definitely “gravitated” to each other! Heyooo! They floated and made out for several hours until Vanessa started vomiting.

Yes we always knew Nick could make a girl vomit, but in this instance, it worked in his favor.

Nick talks about how comforting Vanessa during and after the puking was his favorite part of the date. This makes me think ABC should always send couples on nausea inducing dates to facilitate quick bonding. More disturbing, the two make-out AFTER the improv puking. For the love of God ABC, please have disposable toothbrushes on hand.

Needless-to-say Nick’s desire to make out with her after the puking was clear evidence that Grimaldi is a FRONT-RUNNER.

Nick then takes Vanessa to the roof of the tallest building in LA, (because you know LA is famous for their skyscrapers) where she informs him that her grandfather died three weeks before filming began and she almost didn’t come on the show. Luckily her family encouraged her to come. She says that she knows grandpa is with her throughout this process.

Vanessa asks Nick why he decided to do the show for the third time and he begins crying. He tells Vanessa he was so afraid that he would not fall in love but after their date, he was certain he could.

In his People blog he said this,

“Going into our dinner, I was on such a high. I was excited to spend more time with Vanessa in the hopes that we could build on the magic that we experienced earlier in the day. Sitting down with Vanessa, we connected so easily. Talking about family, relationships and what we want in our futures. The chemistry between us intensified. I’d always found her beautiful, but our emotional connection took hold. I didn’t expect to get emotional around Vanessa and thinking back to that moment it was because I felt an incredible sense of excitement, and hope.”

Nick was worried that after striking out twice, the third time would not be “a charm”.

“Starting this journey, I was stressed this wouldn’t work out. Not because there weren’t amazing women, but I just know how rare it is to find a lifelong love. I feel like I had put a lot of pressure on myself to be the best, or be the man every one of the women wanted me to be. But in that moment with Vanessa, it was clear, that if a connection like this could happen this early, then this whole thing could lead to finding the one. I walked away from that night with a new sense of confidence not only in myself, but in this journey … and Vanessa was a woman I would be lucky to have as a partner.”

So may be there is hope for Nick. We shall see.

By the way if you caught it, this is the girl and the date that Nick was with in the pictures that were leaked by tabloids prior to the start of the show.