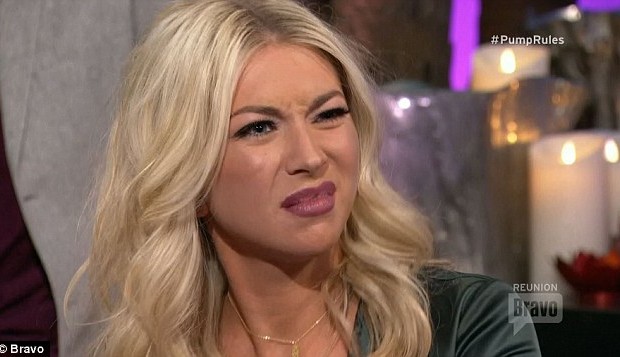 I definitely called this one!–that Vanderpump Rules star Lala Kent had violated her Bravo contract somehow. I just wasn’t sure exactly to what extent. When Lala broke the news to SUR owner and show Producer Lisa Vanderpump, it was obvious that Lisa was not happy. Lisa seriously urged Lala to rethink her decision to leave. In fact it was obvious that this was totally off-script and LVP was panicking about Lala’s unprecedented decision to walk mid-season, because she tries to reel Lala back in with a desperate and very insincere vanity ploy which Lisa only uses in serious emergencies.

Think about the ramifications if stars could simply walk-off the show whenever they wanted? They could end up with unfinished storylines — so no doubt Bravo has a pretty iron-clad contract for their stars ensuring that no detail in your life is off limits to them and that you will allow them to film until the end date agreed upon.

That’s why when Lala left I knew that either 1: she was fired or 2: she left Bravo and LVP high and dry and would likely owe them some money.

So now think of the ramifications if a star could demand co-stars sign an NDA (non-disclosure agreement)? You would never get the good dirt that makes a reality show a show. And if that were even possible surely Lisa Vanderpump would be the first to have an NDA. The fact that she – Lisa F#cking Vanderpump does not even enjoy the luxury of such a contract shows you how absurd Lala’s demand for an NDA from her co-stars was. It also shows just how powerful said married man is.

So I am kind of loving Stassi Schroeder right now. First she dropped the married man’s first name “Randall” knowing that that could very well be enough for that house of cards to fall. And then she had the audacity to reveal the detail about Randall’s wife discovering sex videos of Lala and Randall on his phone. I mean Holy crap!, Stassi is like an 80′s night time soap opera villain/heroine.

Now following the bread crumbs it appears very likely that the married man in question is uber Hollywood Producer Randall Emmett, 45 and he is incredibly powerful. It’s one thing to throw shade at your co-stars but to out a big time A List producer as a cheater and a Sugar-Daddy shows real moxie, Stassi.

This story appears to be turning into a real conspiracy. Last week we learned from James Kennedy that “Randall” was quite intimidating and sort of stalked Lala. And he (Randall) was very worried about this cat falling out of the bag.

Now thanks to James and Stassi we learn that Lala was trying to force her co-stars to sign an NDA to protect his identity. Kennedy claimed the contract was handed out to the people she was hanging out with at Coachella. Perhaps this is why her pal Ellie was so tight-lipped when asked about the man’s identity.

“In between filming seasons, Lala thought she could say the most sickening degrading things about Katie and my friends on podcasts, social media and news outlets. She thought she could disparage every single one of us: call us old, uninteresting has-been; say it as “her” show. All the while she never actually showed any part of her life,”

“We have worked so hard for 5 years to make a great show. We have poured our hearts out and, for better or worse, exposed our lives in every way we could. VPR has been our baby. She doesn’t get to ride our coattails without having to do any work. Lala handed out non-disclosure agreements. A NDA is a COMPLETE violation of the contracts we all have to sign for our show. None of us have the luxury of hiding anything in our lives; therefore, I 100% made it my goal this summer to see that justice was served, regardless of what it would make me look like. Mission accomplished.”

Damn!! Stassi is not messing around. I just worry about her safety especially given the creepy allegations that Emmett’s company has been racketeering! I always associate “racketeering” with mafia–Its usually about moving dirty money around—and the people doing it usually think they are above the law because “the law” is usually in on it.

“Who has time 2 read this? I apologized & Taken accountability. I can’t do NEthing else. U don’t kno me or my personal life-stop speaking on it.” Wow, Stassi is absolutely right. Lala is removed from “reality”. She wants all of the trappings of reality fame and none of “the work” and the work is vulnerability. I mean who does she think she is?

Randall and Lala must be in real panic mode now that his identity is floating around and desperate to get this toothpaste back in the tube. On the show Lala even tried to pass of an ex as a decoy boyfriend offering to take Tom and Ariana to Florida to meet him–how interesting that she choose Tom and Ariana given these are the two who signed the confidentiality agreement. I smell a conspiracy here, but I digress.

If it’s Randall Emmett then he better hope he has an iron-clad prenup with wife Ambyr Childers because that divorce and custody battle could be a big one! And Stassi could be deposed in the court battle.

Side note: How amazing would that be?

At the beginning of the season I felt bad for Lala, but after following her on the show and social media I have to say she has become quite annoying. She even changed her Twitter handle to a name that refers to herself in third person..”Give them Lala”…seriously? Not to mention she is trying to turn it into a hashtag! Someone is giving this girl bad advice.

Then there is her holier than thou job title “voice for the dolphins & whales” and “trophy animal advocate”. Lala is up in arms about the new movie “A Dog’s Life” and the abuse of the dog. Well yeah, that is upsetting, but you are dating a movie producer who likely has been involved in his share of abusing animals to get them to perform–think movies his company EFO has produced like Escape to Grizzly Mountain and Finding Rin Tin Tin. I mean why is Randall romanticizing the life of a dog that was seriously abused into performing?

So I find her new found crusade to be a bit disingenuous and highly suspect.

She has obviously attached herself to someone very powerful that is filling her head with garbage about how important she is and it’s making her quite obnoxious.

Hence, unlike James, Lala isn’t the least bit worried about her career now that she is no longer a star on the popular show.

I wonder if anyone filled her in on how elusive and fleeting fame really is in Hollywood?

I mean look, Katie Maloney has become annoying as hell for sure this season and I’m not really in to all of the Katie worship from Stassi and others, but Lala is definitely a much bigger situation right now. And so I find myself aligning with the OG cast on this.

This story has become much bigger than a Bravo reality show. The fact that an A-List Hollywood Producer is running around sugaring some young hot girl in exchange for oral sex while leaving a wife and young child at home and is intimidating people to STFU, really begs some questions about the integrity of Hollywood moguls.