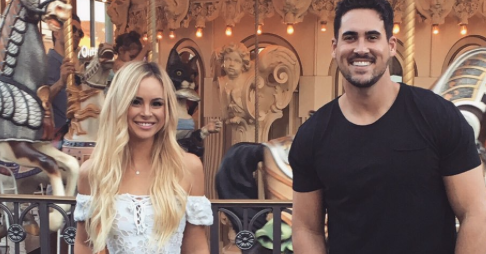 When I first saw 32-year-old Josh Murray on Andi Dorfman’s season of The Bachelorette I was seriously impressed and thought, if by some chance this hunk of burning love does not win this, he will make the perfect Bachelor–he is perfect. Cut to two years later and whoa!, was I wrong.

The Josh Murray – Amanda Stanton breakup is getting ugly and Josh’ reputation is getting uglier by the minute. Josh and Amanda met and fell in love on Bachelor in Paradise this past summer—right after Josh did another reality show, ‘Famously Single’ where he received several weeks of intensive therapy for his relationship issues.

Josh moved to Orange County to be with the single mom, but things got really rocky, really fast.

Yes, you are having deja vu —the couple broke up several months ago, but got back together and then broke up again.

“On March 13, Josh had an appearance in Los Angeles for the [Bachelor] finale of Nick’s season,” she tells E!. “Josh and Amanda got into a big argument that night, and she ended up taking his things from their shared apartment and putting them out in the hallway. I had to go retrieve them for Josh.”

A week later, Josh had Hayley ask his assistant to talk to Stanton about getting his car back.

“I had been speaking with Amanda about getting the car back. Josh purchased the vehicle. It’s all in his name, but he let her use it when they were together and had plans to be a family,” …… “I told Amanda she had two options: she would have to get a lender for the remaining balance of the vehicle [if she wanted] to keep it, or she could give it back.”

Stanton apparently refused both options thus prompting her and Josh to call the police.

“An officer was with me when we went to the place that Josh and Amanda shared to get the vehicle,” …. “We got the keys back and removed all her personal items from the car.”

So predictably, Josh left Orange County and moved back to Atlanta, Georgia. “Josh was tired of this kind of drama.”

Amanda replied to the allegations saying,

“It’s all a lie! It’s just really frustrating,” ……”He doesn’t even have a personal assistant. I don’t know why [she’s calling herself that]. She’s contacted all these people and I don’t know why because he’s in Italy, I’m in Fiji. We haven’t even talked. I don’t know why I woke up to all this. I thought things were fine.”

Stanton claims Murray bought her the car because she had been driving a car that her baby daddy/ex husband, 28-years-old Nick Buonfiglio had bought for her, and Murray was very “jealous”. Stanton claimed, “He’s the worst. Everybody warned me.”
Yikes! Well, this story doesn’t really make either one of them look that great!

Josh is traveling in Europe right now with his family.