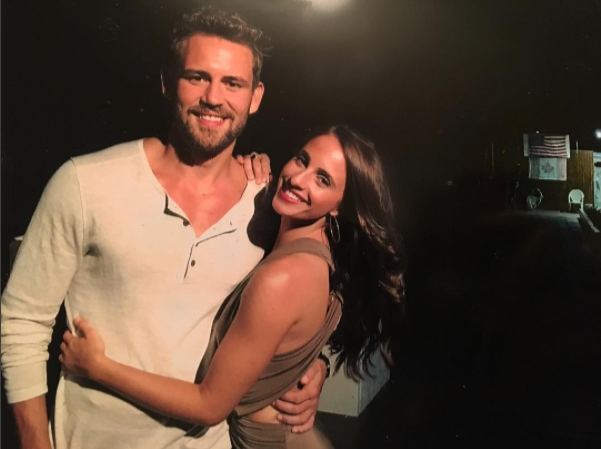 So I thought I might awake to news that Bachelor Nick Viall and new fiancee Vanessa Grimaldi had cancelled all media interviews (as with the Canadian Bachelorette), but surprisingly the two did go on GMA this morning. That said it did not inspire any more confidence in the relationship then their icy showing on After the Final Rose. I mean we have not seen an ATFR episode like this since Emily Maynard and Brad ‘Poke the Bear’ Womack.

Sure the two are acting cordial to one another but it feels like both are phoning it in, aka ABC convinced both of them it was in their best interest to put on a big smile and make people think the relationship was still a go. The body language is pretty telling in my opinion.

I think the biggest clue was when host Michael Strahan asks about wedding plans and Nick says “we are just trying to be realistic about the relationship” aka, ‘we are going to pretend to be together with selfies and posts for about 9 months and then will announce an official breakup during the Holidays when no one is paying attention and no one cares about us anymore.’

Here is the video:

And how ’bout the part where Nick uses this big moment in the spotlight to plug his new website “The Polished Gent”!!! Are you kidding me??? I don’t even know where to begin on this situation.

I am sadly rooting for this couple to call it quits mainly because of Vanessa’s students. I mean that is a very real situation and a very real emotional connection.

I’m sorry to be bumming so hard on this couple! Usually despite my reservations, ABC finds a way to convince me to root for a couple anyway, but sadly, not this time.