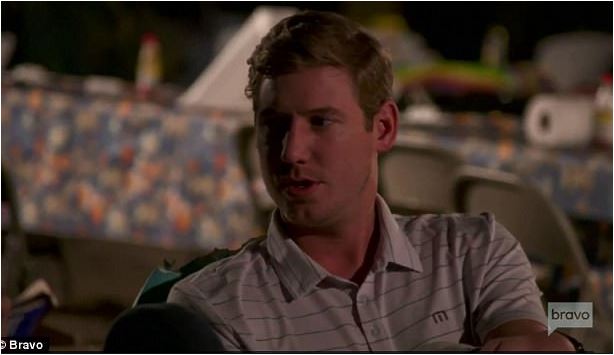 Twenty-nine-year-old Southern Charm star Austen Kroll comes off as cheerful, and light-hearted on the show, but his upbeat posture may be masking some real sadness.

In August of 1994 when he was 7 years-old he was hiking on a vacation with his family in Chimney Rock State Park, NC when his 9-year-old sister Kyle fell off of a 200 foot cliff to her death.

Austen explained on the last episode that the incident happened four days after his parents, Wendy and Tom Kroll moved him and his sister from D.C. to Charlotte, North Carolina.

‘It was all pretty surreal,’ said Austen recounted.

‘I didn’t understand death at that time in my life’ I was like, “Oh, we’re going to the hospital, she scrapped her knee and we’re gonna pick her back up.”

‘And it wasn’t so, and it took me a while to realize that, and it was the worst day of my life.’

According to the Wilmington Morning Star Kyle and her cousins ran ahead of Austen, and the rest of the group when Austen’s sister got outside one of the barricades that ran along the trails.

‘The moment her aunt noticed this she slipped and fell,’ Rutherford County coroner Shane Earley told the paper.

The event happened after some heavy rains making the trail slippery. Kyle was killed instantly from her injuries.

As a result of the tragedy, Austen’s parents decided to have another child so Austen wouldn’t be an only child. Consequently Austen got a baby sister named, Katie. The disclosure came during a date with Chelsea Meissner.