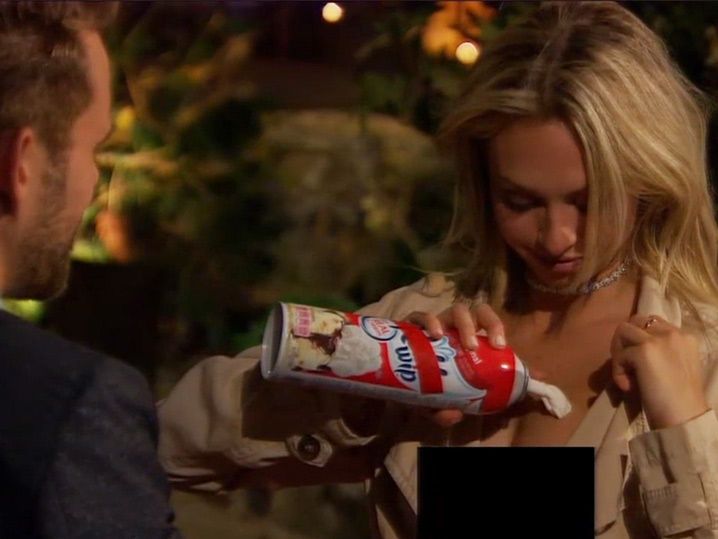 Twenty-four-year-old Bachelor in Paradise star Corinne Olympios is really giving Courtney Robertson a run for her Bachelor Nation vixen money. Apparently the girl with the platinum vagine hooked up with more than just DeMario Jackson in Sayulita, Mexico recently.

‘Derek was pretty drunk at the time,’ an eyewitness said. ‘Everyone was a bit toasted. It was like Corinne was trying to make-out with as many guys as possible, and that was just day one.’

She also made out with Saint Nick.

‘Corinne then leaned over and started kissing him. She was wearing a bathing suit top and like cover-up beach sarong. Nick was obviously pleasantly surprised that here was Corinne all over him. This happened at about 3:30 pm on Sunday, the first day of filming.’

Shortly after Corinne met up with DeMario at the bar on the beach and started making out with him.

‘I was kind of surprised because she said she was not going to go on any dates because she had a boyfriend back home named Jordan Gielchinsky. But as it turned out that didn’t stop her from hooking up with DeMario in the pool.’

After the infamous pool situation where Corinne and DeMario engaged in oral sex, she made out with Alex W.

I love that even host Chris Harrison had to lay the smack down after Corinne jumped onto Derek Peth’s lap and started kissing him. Chris said, ‘OK guys, come on settle down’.

BiP season 4 is quickly turning into Caligula! CBH is going to need a brand new hand gesture to deal with this situation.

Corinne was so amorous that producers had to shut down her alcohol consumption on the last night of filming–an act that allegedly upset Olympios and prompted her to make threats against the show.

Co-star Jasmine Goode, told E! that after the pool incident “everything seemed fine,….however, when producers tried to cut her off from drinking, she got upset and said, ‘Watch what I’m gonna do.’”

Best friend, Bachelor producer and likely shill, Shelby Adams, told Corinne “showing off her p***y in public and letting DeMario go down on her in public was going to make her look bad and that fooling around with so many other guys was going to hurt her image for the new show”.

That’s right Corinne was supposedly getting her own show. Although I’m not sure I actually believe that. It seems more likely that the promise of a ‘show’ was a good way to coral Corinne with her impulse control problems.

“I don’t think Corinne even knew what was going on in terms of Shelby and another producer Jessica Brown complaining about the pool incident. I think Corinne dug a hole for herself. She said or did something and now she’s crying wolf. It doesn’t make sense at all. From day one of filming, she kept talking about her new show, that she was going to have her own show on another network. I guess on Freeform. She also kept talking about the book she was going to write.”

Well one person that is standing by Corinne is her boyfriend. Jordan’s not going anywhere and doesn’t even think he was cheated on!

Neither Corinne nor DeMario will return for filming. I suspect Corinne regrets her decision to make these allegations. But at least we can look forward to some serious situations this summer!

Was the Corinne-DeMario situation all part of a conspiracy to have The Bachelor cancelled?