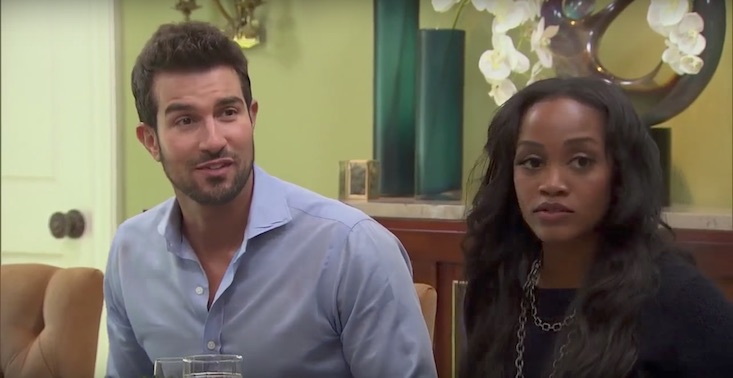 Bachelorette contestant Bryan Abasolo definitely has had a clear advantage from the minute he landed on the freshly hosed mansion driveway. It was clear that Bachelorette Rachel Lindsay was smitten with the Columbian Chiropractor. And up until last week I thought Bryan was definitely his first choice. But apparently the castoffs think it’s Bryan that is now engaged to the 32-year-old Dallas attorney and not Peter Kraus.

“I just feel like, Bryan is 37, he has no qualms about who he is or what he wants, and I believe that’s what Rachel likes,” Kenny King told ET at the Men Tell All taping. “Bryan is a great looking dude, he’s got a great career and he’s been there, done that. He’s seen the game and now he’s ready to find his queen.”

“I don’t think he’s disingenuous. I think Bryan is the real deal,” he added.

Adam Gottschalk said, “I like Bryan a lot….. I think his intentions are very good… The one thing I really do like about Bryan is he’s all in. He’s not half-ass, he’s not 50 percent. He’s 100 percent in, and I think that’s the trait that has kept him there as long as it has, and hopefully Rachel knows that and she can see it.”

I think that was a little dig at Peter who has expressed his doubts.

All along Bryan has been criticized for being a bit of a smooth talker and Player, but apparently they don’t think that discounts his sincerity.

Jack Stone, said this about Bryan’s past on a reality show called The Player,

“That was a long time ago…..He’s an older guy… and I don’t think he’s been engaged before, but that doesn’t mean that he’s not ready to settle down and get married and take his leap to the next phase in his life.”