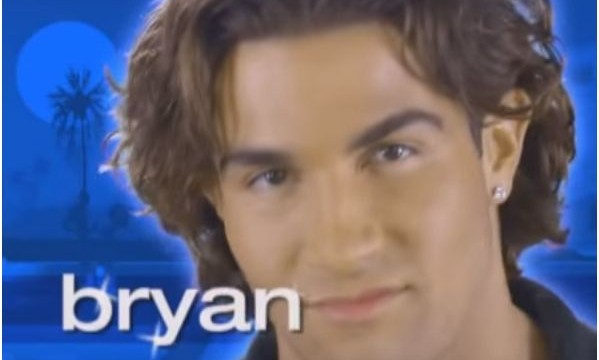 Thirty-seven-year-old Bachelorette contestant Bryan Abasolo is no stranger to looking for love on national television. Back in 2004 the handsome Colombian chiropractor starred on a UPN show called The Player where 13 men competed to earn a date with a Miami model named Dawn.

At the time Dr. Bryan was a ‘club promoter’ from Miami, Florida. Thankfully Bryan has a few more years of education and experience under his belt now and lost the highlights and the earring and allowed his over-plucked eyebrows to grow back.

I’m still waiting for someone to uncover Bryan’s past in a boy band. Anyhow the revelation proves that Bryan has apparently always been a metro-sexual and a baller.

On his final days on the show he hired a plane to fly a banner reading “Dawn & Bryan!!!”

“Dawn knew something was up later when she asked his buddies about Bryan and they fell silent,”…… “With nothing to say about their best friend, Dawn started to doubt his player skills. The following day, while the other two guys were competing for Dawn’s attention, Bryan just stayed downstairs and kept to himself, which only helped Dawn make her decision. So, at the time of elimination, her choice was easy, and she asked Bryan to leave. She just felt he had no game.”

Cut to 13 years later and Bryan has clearly honed his ‘player’ skills.