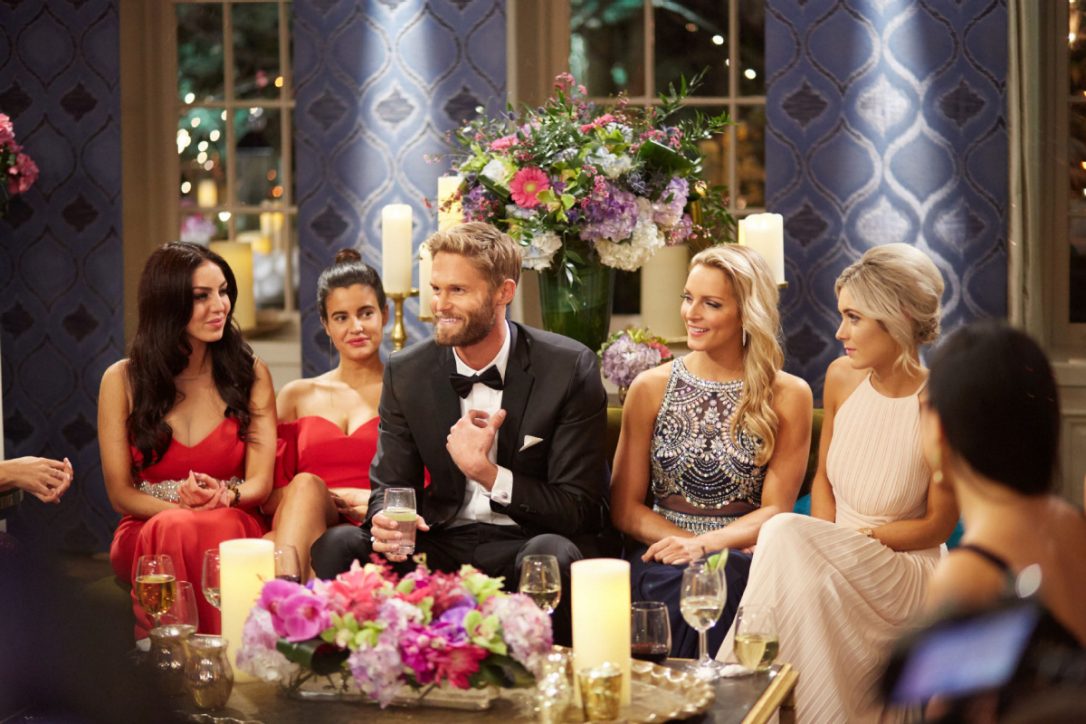 The 6′ 5″ heart-throb celebrated his 33rd birthday by meeting 20 amazing ladies carefully chosen for him by a team of professionals and television producers.

First we get the introduction. Chris is a big deal–much like the first Canadian Bachelor, Brad Smith, Chris is also a retired professional athlete. He was raised in Mississauga just outside the big city of Toronto on Lake Ontario. His parents have been happily married for 40 years and he has a brother that’s also happily married. Chris is ready to settle down. And make no mistake, he is ‘lonely’ — as the show constantly reminds us.

Then we have a cross-over event — American Bachelorette Kaitlyn Bristowe and fiancée Shawn Booth arrive with some advice. I feel pretty certain that the majority of Shawn’s advice involves hair-sculpting and Kaitlyn is probably advising Chris to make sure his mic is in the off position if he tries to have any off-camera sexy time with a contestant.

Then the ladies arrive!–19 ladies and one mermaid to be exact.

Brittany Michalchuk of Calgary, Alberta presents as a bit high maintenance. The 27-year-old “pageant queen” is not shy about being an “alpha female,” (so let’s hope that Chris is a big bottom), and pulls Chris aside more than her contractually allotted one time to try and gain an advantage over the beta females. 31-year-old Shanti Singh also seems like she could be a bit of a villain-ess. Shanti is a former model/actor from Winnipeg that laments to cameras about a “list of haters” and a “kill list”—Aka, this one may require a TRO Chris! Dee Chan of Kitchener, Ontario gets the award for best occupation. The 32-year-old “princess tomboy” owns a spray tan business. She earns the first rose but has yet to deliver the news to Chris that she’s a package deal and comes with a 5-year-old daughter.

Catie Fenn made a huge impression on fans. People on Twitter went crazy for the cute 29-year-old Toronto lawyer/meditation coach.

And I love that she served Chris with a legal document requiring him to participate in Bachelor Canada for “the sole purpose of looking for love and adventure.”

We may need Catie later to write the TRO for Shanti.

Meghan House, 24, Deer Lake, Newfoundland — fans seemed very excited that the oft neglected Newfoundland had some representation this season. Meghan is a waitress and former “fatty Patty”. She also let Chris know right out of the gate that she bought herself a set of fake “boobs”. I wonder if she will hold a birthday party for her boobs like Alexis Waters did? Aspiring Toronto model Shaleen got the boot–along with Pricilla, Chelsea, and Stephanie.

If you are in Canada you can watch the episode online here.