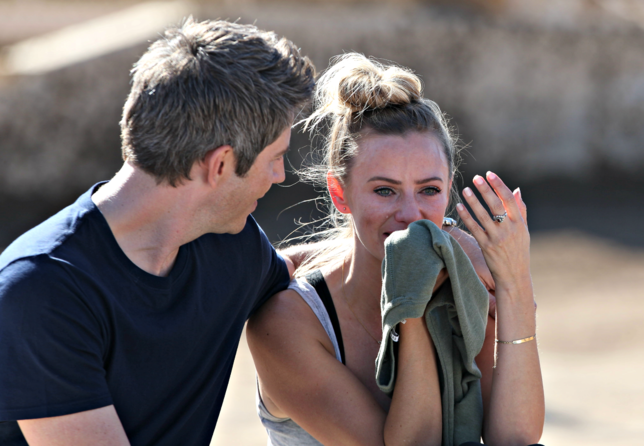 Monday night on The Bachelor we saw the first self-elimination and the the first truly awkward situation play-out with Annaliese Puccini and Bachelor Arie Luyendyk.

First let’s gives props to that girl for a terribly difficult sitch and no doubt she will count her blessings looking back on things, but that was tough, and it was tough to watch.

Remember Annaliese, this is the guy that said he loved his job at Pizza Hut and almost didn’t graduate from High school in his intro.

So the 33-year-old Actress/Model/Event Floral Designer from San Mateo has been having a tough few weeks. Last Monday she was confronted with a traumatic bumper car memory when producers put her on the demolition derby group date.

This week she has to confront her crippling fear of tiny dogs during the dog show date. Not only that, but on said date, she is given dog dooty duty. But Annaliese is a good sport. She stays focused and cheerful, but problems arise later that night when she goes out on a limb and pulls Arie aside and asks if she can give him a kiss. Keep in mind, at this point Arie has had serious makeout sessions with at least a dozen or so girls.

The request seemed reasonable, but alas, Annaliese was shut down by the kissing bandit and told that they were ‘not there yet’, which wouldn’t have been so bad if she had not seen Arie get ‘there’ with nearly everyone else on the show!

In his blog he gives some insight into what he was thinking.

“It was a bummer that Annaliese had a difficult time with dogs, just like she had with bumper cars. I was hoping she’d finally get to enjoy herself on a date. I get it, though — some people have fears surrounding animals. I was just happy to see she could embrace her role (of the pooper scooper) and enjoy the day without getting too scared.”

“One of the more difficult parts of watching this episode back is seeing Annaliese feeling so neglected and so hurt. Annaliese is amazing, and I really felt a connection with her the first night. I thought we had really great potential. But, by this time, I really didn’t feel the chemistry. I know that the women left a lot behind to come meet me, and I really promised myself that I wouldn’t lead any of them on. As soon as I was 100 percent sure someone wouldn’t be a long-term partner, I knew I had to say goodbye. That’s why I couldn’t kiss Annaliese, and why I ultimately had to say goodbye. As much as being rejected can hurt, I couldn’t lead her on.”

After Arie rejected her kiss things got even worse when Anna was encouraged by her castmates to ask Arie to clarify is statement ‘not there yet’. The confrontation is even too cringe-worthy for the other girls to watch as they hide their heads in their hands.

Needless-to-say Arie was good about being honest and not trying to spare her feelings. He easily could have given her the kiss and then dumped her during the less nerve-racking rose ceremony, but he confessed that he just wasn’t feelin’ it and gave her the opportunity to leave on the spot.