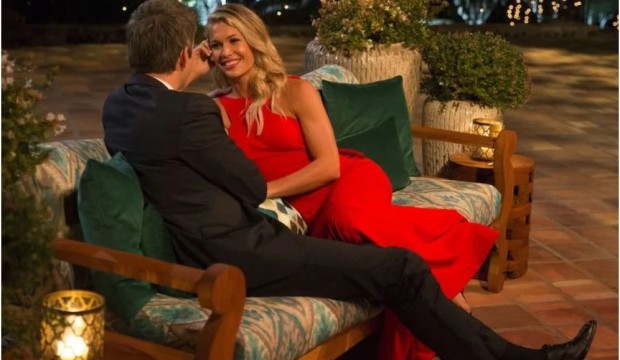 Krystal Nielson is a situation on this season of The Bachelor. First let me say that Krystal exemplifies why I abandoned the New Age movement a few years ago–the endless, unsolicited life-coaching lectures; the long diatribes containing broad generalities and contradictions; the Oprah/Dr. Phil catch phrases that sound good at first, but in actuality mean nothing; the overuse of terms like, “be the best version of yourself”, “speak your truth”, “manifest abundance”, “be the change you want to see”, “don’t give away your power”, ‘mindfulness”, etc.etc; the soft, calm, porn star voice; and the thin veil of humility and bliss covering a giant superstructure of narcissism and sublimated rage.

It’s just too much. The girl is exhausting. And she is driving the other women in the Bachelor mans crazy.

Krystal has clearly ‘ascended’ into 5D, but Arie Luyendyk lives in 1D and can’t see past the sexy porn-star presentation. He is hooked on Krystal.

And Monday night she pulled him aside and asked him if he wanted her to be more aggressive, because ‘being aggressive’ simply isn’t in her nature. Wait…whaaaat??!

Arie was like, ‘no, just be you’. So Krystal then led a women’s circle and offered up unsolicited advice for how they should pursue their romantic relationships with Arie even as the infamous luggage grab was happening signaling the shocking elimination of Lauren Schleyer.

Needless-to-say Arie claims he was totally unaware of the big sitch that was Krystal Nielson in his People blog.

“One of the wildest parts of watching the episodes with you guys is seeing what’s going on between the women. I remember at this point sensing some tension amongst them, but being unsure of who or what was the cause. Watching it back, it’s obvious that Krystal was rubbing the women the wrong way. From my perspective, I was flattered by her aggressive approach.”

It has become abundantly clear that Arie is a big bottom and likes a girl that takes charge and requires a lot of attention.

“It felt like she truly put our relationship first. Also — and I know this from Emily’s season — it’s really hard to go from an early one-on-one date to a group date. After having so much alone time, it’s difficult watching the person you’re falling for spend so much time dating other people. Yes, you know that’s just part of being on the show, but actually experiencing it is way harder than anyone realizes. On the other hand, I totally get why the women were a little annoyed. They’re all trying to get time with me, and I think maybe her approach could have been more finessed.”

Well that’s a nice way of saying it. All I know is Krystal is making me really miss Corinne Olympios and her diatribes about wanting a ‘tiny boob job’ and her nanny to make her cheese pasta and a cucumber salad. I’m sure if Corinne were here she would definitely need a nap from such intense energy.

Let’s hope Arie sobers up and realizes that he has a Krystal problem and releases her back into the universe ASAP.

Annaliese Puccini self eliminates on The Bachelor