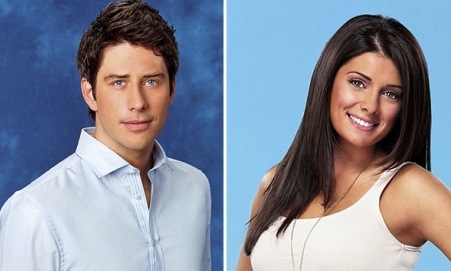 So much shade being bandied about in Bachelor Nation right now! Bachelor Arie Luyendyk met Jef Holm on Emily Maynard’s season of The Bachelorette. The two became super tight after the show wrapped and as two handsome single men looking for love they would go out and meet women together. Needless to say, Jef observed Arie allegedly behaving badly with women and the two parted ways.

That’s after tweeting that Luyendyk was “disgusting” in September.

It’s hard to know who is telling the truth because I found some really salacious rumors about Jef behaving badly as well. And now another Bachelor Nation alumni has come forward to defend Arie — none other than San Diego real estate developer and ex-girlfriend Selma Alameri.

Selma claimed she did not see the tweet from Holm, but,

“I believe Jef has been wanting to be the Bachelor for quite some time, so I’m sure it kills him to see Arie as the Bachelor rather than himself,” Selma told Us. “And that’s not a dig at Jef, but it’s just my honest opinion. Sorry Jef, but usually [when] there is negativeness put out there, it comes from jealously.”

According to Reality Steve Jef has been banned from Bachelor Nation and wants back in badly.

And interestingly, here is what one insider said about Jef Holm behaving badly with women,

“Back when Jef and some others created his company, I was asked to join in. I had been to Africa several times on service trips and our mutual friend Weslie Christensen and her husband were involved I joined in. This was before Emily’s season.

Jef was definitely very hot to my young (at the time) self. So naturally we would hook up all the time. Right before he left for Emily’s season, I had no idea. Everyone at work assumed I knew but because of what I did for the company I was left in the dark. He told me he was leaving on a humanitarian trip and then he left. I figured it out pretty quick. I was needless to say, very devastated at first. But I got over it and ended up taking the first good opportunity I had and moved to Scottsdale.

I ended up meeting Courtney at a popular bar/restaraunt there and we became friends. Not best friends but we would meet up every once in awhile.

After the Jef/Emily breakup I ran into Jef at the mall with Arie. Taking fan pictures with all the teenage fans which I thought was so weird, why were they wandering around Scottsdale mall (not shopping) to take pictures with 16 year old girls.

Long story short Jef had this great sob story about how sorry he was, I took the bait and then we would make out in back of movie theaters, my place, you get it.”

Anyhow the insider goes on to claim that Jef was a serial cheater and pursued numerous younger women.

So it sounds like both boys have a problem of some sort.