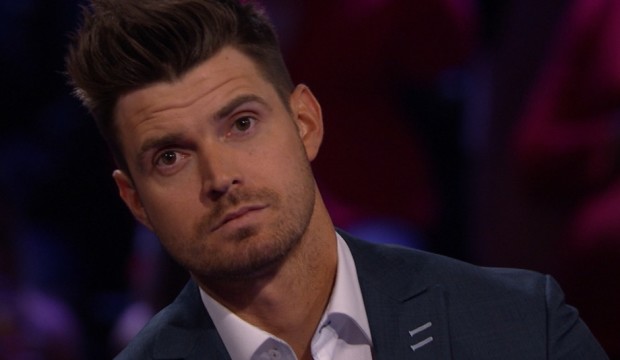 Now it certainly did not come as a shock to me. In fact I contended from the getgo that Luke was playing Stassi and pretending to be attracted to her so he could stay on the show.

And one reason he chose Stassi IMO was because it would be so easy to bow out of the relationship using the long-distance card. But the plan back-fired because on the finale when they talked ‘distance’ Stassi said she would move to the ends of the earth to be with the right man. Oops!! But that didn’t stop Luke from continuing to lead Stassi on til the very end. He narrowly escapes the Fantasy Suite by telling her nothing was more important than ‘respecting her’–I almost threw up. He continued to stare lovingly into her eyes, rub her hands and back and espouse generic platitudes–although if you notice he never really kisses her.

Anyhow, cut to the Tell All and Luke has done Stassi wrong and she is back to get some answers!

In the hot seat she tells Chris Harrison everything changed once the season ended and that Luke didn’t even get her phone number!

She disses Luke again when he walks out shaking his hand saying “Stassi. Nice to meet you.” as in ‘you likely have no recollection of who I am’.

Luke was REALLY hoping he could say he really had feelings for her but the distance was just too great, but unfortunately Stassi called his bluff and was ready to move to Burnett, Texas so Luke has to come up with a new excuse.

Luke blathers about how it just didn’t work, but he really shows his true colors when Luke thinks the cameras are off him for a commercial break and Stassi keeps pressing him for answers and he callously responds “sorry for the confusion” and then when she keeps asking him questions he replies, “Yeah. Yeah. Sure,” without even the courtesy of eye contact.

Sure relationships don’t always work on the show, but Luke revealed through his actions that he was intentionally leading her on for his own selfish ends. None of his excuses can answer the question of why he did not even give Stassi his phone number.

Long story short, Luke comes off looking like a REAL schmuck and I think the world figured out why ABC changed their minds about letting him lead The Bachelor in 2017.

He may have even taken the place of Chad Johnson as Bachelor Nation’s most hated contestant ever.

I suspect this will be the last we see of Luke on any Bachelor show.