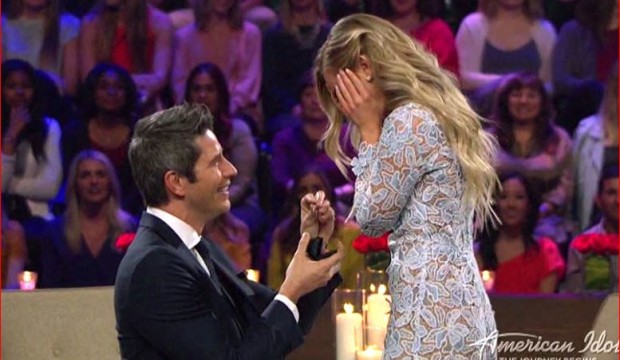 So on the bright side on this season of The Bachelor fans got a two for one. Two engagements in one season over two nights.

The show left us on a cliff hanger with the implication that tonight we would see Arie reunite with Lauren and ask her if she would continue to date him. And that is what happened. Arie went to Laurens hometown in Virgina Beach and explained his change of heart.

Lauren grilled Arie about why he proposed to Becca in the first place and Arie essentially said he was worried that Lauren would say no. When asked if he was totally over Becca, Arie enthusiastically responds “Yes!, 1000%, yes”, which has gotta make Becca feel good.

The two have been dating for a few weeks off-camera.

I thought there was a chance that young sweet Lauren would see the light and send the unemployed race car driver packing, but sadly she accepts his proposal of marriage. Lauren tells Chris,

“I’ve never been more in love with him,” ……. “We’re very, very happy,” Lauren tells host Chris Harrison. Arie adds that in a “crazy” way, the experience has made their love “stronger.”

Chris naturally asked if she trusts Arie, and she replied, “Absolutely. I wouldn’t have given it a second chance if I didn’t think that.”

Arie then gets down on one knee to pop the question–hopefully with a different Neil Lane ring. Still waiting for deets on the ring. “I have made some bad decisions, but the best decision was running back to you. I can’t imagine a life without you. You have shown me a love that is patient, a love that is kind, and I truly believe you are my soul mate,” Arie said. “I’m ready to face this life with you and all that comes with it. Good and bad. I love you so much. And I want to do this in front of everyone because I want to show you that I should have done this a long time ago.”

Arie tells fans that he is taking his new bride to be out of the country–which is probably for the best considering the outrage of Bachelor Nation.

“We’re going on a little vacation. We’re going to get out of the country for a little bit and then Lauren is going to move to Arizona.”

If you are wondering what Lauren likes about Arie (cause we are) she said,

I think he is great, but the one thing that is present right now to me is just his bravery and his honesty, and I think that he did an amazing job at handling this whole thing. And he couldn’t have gone about it in a more respectful way, and I’m really proud of him.”

ABC announces that Becca Kufrin will be next Bachelorette