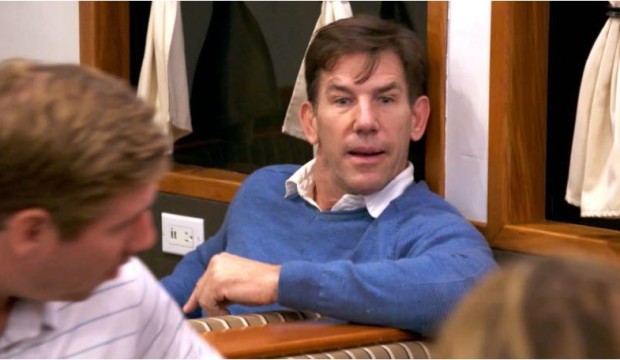 On Thursday’s episode the cast continues their vaca to and in Hilton Head and we watch T Rav’s girlfriend seriously circle the drain as she repeatedly bashes Kathryn Dennis’ parenting skills.

Now, it’s no secret that Kathryn, 24, has had her share of struggles, hence her court-ordered drug tests, but everyone knows that parenting skills are simply off limits for non-family members.

So in a twisted effort to ingratiate herself to the other charmers, Ashley proclaims that she has dirt on Kathryn that would shock them.

Danni Baird stops Ashley to tell her that the girls know their friend Kathryn very well.

But Ashley is unphased and launches into a list of issues. Despite Kathryn urging her not to address the children, Ashley goes there, telling the crew that Kensie and Saint act differently when they come back from a weekend with Kathryn.

They don’t sleep well the first night and Ashley asserts and she’s concerned what will happen if Kathryn gets more custody.

Ashley says she sees Kathryn’s kids more than she does.

“How bad of a mother do you have to be to have both of your children taken from you and given to a convicted felon?” she says.

Ashley claims the damning intel comes from “the nanny.”

Thomas walks over to the table, and Whitney and Danni implore him to “intervene” and “shut her up.”

But Thomas surprisingly does nothing.

Ashley blasts Kathryn for not visiting Saint in the hospital when he had his adenoids taken out, but unbeknownst to Ashley, Thomas didn’t tell Kathryn about the surgery.

Danni is finally able to persuade Thomas to take Ashley away.

Kathryn is understandably upset, but not really all that upset.

“I like blacked the f—k out, disassociated, and was in like, shock, panic,” she said. “Old Kathryn would have flipped the f—k out and gone ape-shit on her…but everyone saw that she was just trying to entertain. She was on display, she was enjoying it. And when I saw that, I was like hm, you don’t deserve a response.”

Funny thing is Ashley is not remotely remorseful or mortified as she should be. Nor is she terrified that Thomas will break up with her after disrespecting his baby mama.

On the ferry, Chelsea tells Thomas it’s not fair to Kathryn to have to be in the house with Ashley. I suppose Chelsea feels somewhat responsible since this is sort of her trip although apparently she doesn’t have much control!

T-Rav finally starts to react to the drama, yelling at Chelsea about how she has no say so about who stays in the house.

Ashley, utterly oblivious to how she has just alienated every one of T Ravs close friends, moves over next to Thomas and starts making out with him.

“It’s me and you against the world” she proudly proclaims.

When the crew arrives at their Hilton Head crash pad Ashley unleashes on Chelsea.

The next morning, the girls decompress from the drama that unfolded the night before. They surprisingly seem a little sympathetic to Ashley saying there is no coming back from what Ashley said. The women assume that Ashley will eventually emerge to apologize, but they are wrong.

There is no contrition…no shame spiral.

Ashley does tell Thomas that she doesn’t remember everything, but also says she doesn’t feel she needs to apologize. Thomas tells her to tone it down for the rest of the trip.