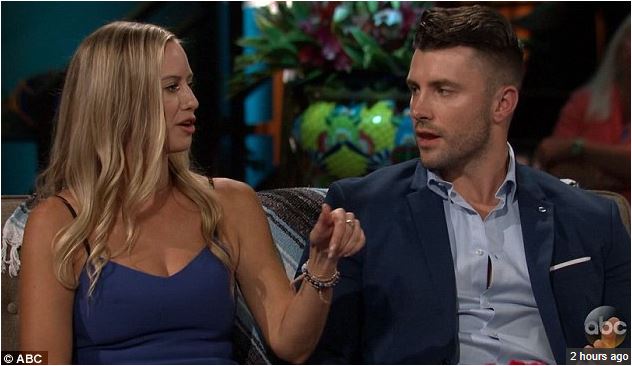 It appeared that 33-year-old San Mateo Actress/Model/Event Floral Designer, Annaliese Puccini finally caught a break on Bachelor in Paradise after being ditched by Jordan Kimball and dumped by Bachelor Arie Luyendyk.

Yes, when 30-year-old Monroe, New York model Kamil Nicalek landed in paradise Annaliese was filled with hope that her run of bad luck was finally about to end.

Kamil was precisely what she was looking for in a life partner and he appeared to be just as enthusiastic about her.

Kamil tells Annaliese, “I love you and I want to have a future together”…”I know you’re ready for engagement but right now I am not. I need to move at a pace that is long term for us..the love I have for you is very strong and I want it to blossom outside of paradise”

And despite no engagement Annaliese says she’s not worried…”were on that path” she tells cameras.

But little does she realize Kamil is about to drop a bomb on her. Kamil tells Chris that the “spark,” is now gone and he’s not the guy for her.

“I don’t mean to shock you like this,” Kamil mutters. “It’s been coming for a few days.” Ut oh!

Harrison asks Annaliese what she wants: “To get off this stage,” she replies as she gets up and walks away.

Cameras follow her backstage and producers persuade/coerce her to come back on stage to publicly read Kamil the riot act.

“I literally tried to break up with you like two weeks ago,” says Annaliese. “And you said, ‘I don’t want to lose you and I’m going to fight for you.’”

Needless to say this relationship is officially over and Annaliese will inevitably be invited back to paradise next summer to do it all over again.