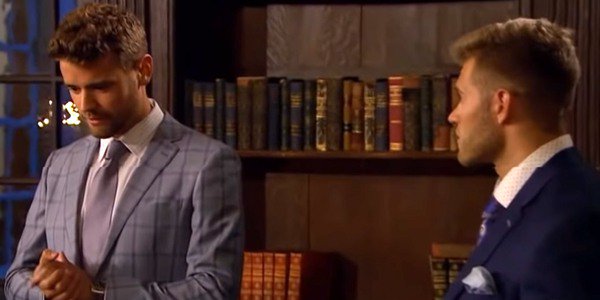 Then Luke Parker tackles Luke Stone, but P. claims it was self-defense.

Luke S. has had enough. Hannah pulls Parker aside at the cocktail party to discuss the situation, and P. tells the Bachelorette that Stone tried to physically attack him.

Parker also says he has no issues with anyone in the house, and that Luke S. is on the show to start and promote a tequila business. Luke S. calls Luke P. a psychopath.

Brown is starting to get suspicious of Luke P. so she starts questioning some of the other men. They confirm that Luke P. is a situation.

But as a result of the Luke riff on episode 5, it’s Luke Stone that decides he’s has had enough and self eliminates.

Brown told Entertainment Tonight, “I only get the conversation that I have with each of the guys, and so it is sometimes difficult to see, ‘Oh, so that’s actually what happened’ … I take the information that I’m given, and I just trust throughout the process that I will be able to make my own decisions with information that I’m given and my discernment in my own time … So, with Luke P., with anybody, and with myself, I just hope this is a learning experience where we can all continue to grow.”

Shockingly Hannah B. keeps Parker, but previews for coming episodes suggest his time may be short.

Parker recently took to Instagram to address some of his behavior on the show. In one of his posts, Parker wrote, “I just want to address the elephant in the room here really quick. First I want you all to know how hard it has been for me to watch myself this season so far … I have learned a lot and I am continuing to learn about my flaws as a man. I’m the first to admit I am far from perfect. This journey has given me a great opportunity to grow and mature as a man, for that I am grateful.”