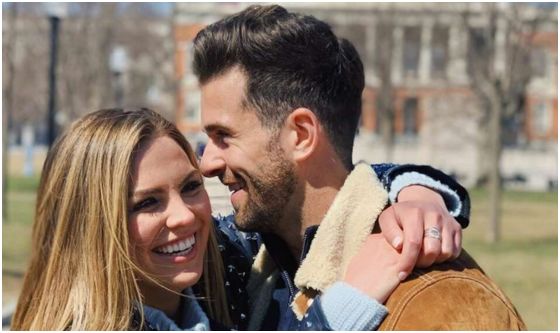 Hannah Brown’s Bachelorette finale aired tonight (although it was filmed 2 months ago).

Fans watched Nashville singer Jed Wyatt, 26, get down on bended knee and propose to the 24-year-old pageant queen, but things took an unexpected and startling turn on the Live after show amid tabloid reports that Jed told his then girlfriend Haley Stevens that he was only going on the show to make it to the top 5 in an effort to promote his music career.

And naturally that rumor was only solidified when Jed brought his guitar to the proposal and dropped his single before dropping to one knee.

“Talking is hard sometimes for me,” he told Hannah as he pulled out his six-string.

“After all that you’ve been through/ and those times you wish you knew who was on the other side of all those restless nights/ we always knew it’s me and you/ time stands still for us.”

Cut to 2 months later aka tonight on the After show, Hannah revealed,

“I am not with Jed anymore.”

Brown explained to situation specialist Chris Harrison that two days after the two got engaged, Wyatt told her that he had been dating another woman and ended the relationship a week before he went on the show.

“A few weeks later I get news that a People Magazine article was out and it was not the same story I was told. The article said that he didn’t really end the relationship before he came here…The extent of that and what was withheld for me is not OK. It’s not what I thought I said yes to,” Brown said, ready to confront Wyatt.

Naturally Brown wanted some answers from Jed like: why did you wait until the show was over and we were engaged to tell me! First she asks:

“Why did you wait until all this happened to tell me, or not even to tell me but to let me find out what actually happened?”

“There was two very different views of what actually happened,” replied Wyatt.

In Wyatt ‘s ‘view’ the relationship with Haley Stevens was not exclusive and ended before he went on the show. Jed claims the two started dating in late October, slept together, went on two trips and met his parents.

“In my mind, I was going there for a music thing,” Wyatt concedes that he did not have the best intentions for doing the show.

And surprisingly Jed admits he slept with Stevens the night before he went on the show and that he never broke up with her!

“To me, I ended it in my heart but not verbally.”

But that’s not all Brown revealed on the After show.

She claimed that while they were engaged, he allowed strange women to come into his home in Nashville and threw them in the pool.

“I know I had opportunities to tell you but I would get there and think I would lose you, which is selfish,” Wyatt proclaimed.

Hannah responds, “That’s not what I said yes to,” as she removes her Neil Lane engagement ring and puts it on the table.

Jed did take the opportunity to apologize, but clearly the apology falls flat.

“First and foremost from the bottom of my heart I want to admit that I’m sorry. Especially in hindsight and now that I had time to review myself and my past and my behaviors, I… I see that I wasn’t the best that I could be,” he said.

“When I was reached out for doing the show I never imagined I would meet the person I would spend the rest of my life with. I never would have dreamed you would be there. I’m sorry.”

“I did fall in love with you and I know that person’s in there….”

“You’re still in love with this woman?” Harrison inquires.

“I always will be,” said Wyatt.

“I’m not trying to punish you, but my feelings have changed,” said Brown.

So Hannah did actually break up with Jed over the phone prior to the show but she took the opportunity to double dump him on national TV.

And in the ultimate act of revenge, Hannah brings out her runner-up Tyler Cameron to ask him for a second chance. The two commit to having a drink together and giving things another try.