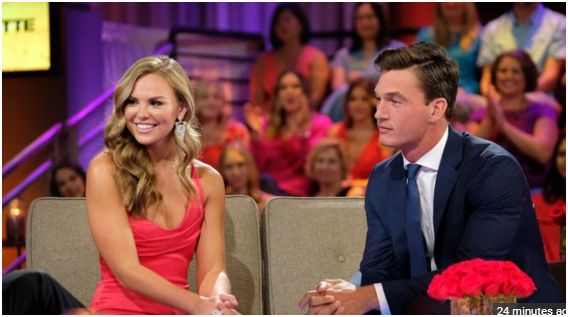 So Hannah Brown’s season of The Bachelorette did have a happy ending as in Hannah and Jed Wyatt did get engaged, BUT things didn’t end there. After the cameras left chaos ensued when news came out that Jed failed to end an exclusive relationship with a woman before going on the show to meet Hannah!

And at the beginning of tonight’s finale live show at a studio in LA, host Chris Harrison braced the audience for an epic situation: “We will see a proposal…that can only be described as cringe-worthy.” (I’m guessing the cringe-worthy part was the part where we had to listen to the song Jed wrote for Hannah).

So a romantic proposal did take place, but after the audience watched the proposal Hannah broke the news to Harrison,

“I am not with Jed anymore.” She told the crowd that the two broke up over the phone.

“I know that I deserved more than that.”

But wait….there may still be a happy ending for Hannah and one lucky suitor.

Hannah dumped runner-up Tyler Cameron, 26, at the altar after he started to propose to her.

“My life with you would be amazing. And when I told you I was falling in love with you I mean[t] it. I love someone else. I’m so sorry,” Brown said.

Cameron graciously replied: “I’m still going to be your biggest fan and root for you. I wish you and Jed nothing but success.”

Cut to the live show. Wyatt comes out to apologize for the girlfriend situation:

“When I was reached out for doing the show I never imagined I would meet the person I would spend the rest of my life with. I never would have dreamed you would be there. I’m sorry.”

“I did fall in love with you and I know that person’s in there,” ….. “I hope that from this you will be honest and learn and grow into the man that I think you can be for whoever in the future.”

“You’re still in love with this woman?” Harrison asked Jed.

“I always will be,” said Wyatt.

“I’m not trying to punish you, but my feelings have changed,” Hannah says.

Cut to runner up Cameron. Hannah tells him:

“Those feelings just didn’t go away,” ….. “You’re an incredible guy and I’m a single girl,” asking Cameron out for a drink sometime.

“I would love to, just tell me when,” he replied.

So are Hannah Brown and Tyler Cameron together? I think the answer is yes and they have only just begun their journey.

Hannah B and Jed Wyatt get engaged....and then break up