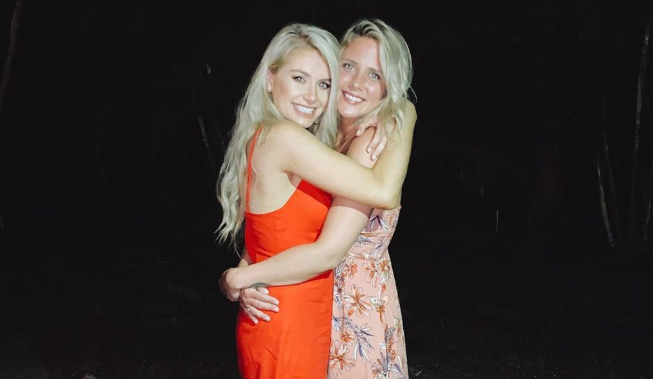 Bachelor in Paradise producers decided to cast 24-year-old  Actress Demi Burnett as the X factor on season 6 of the show….and boy is she bringin’ it!

Demi is reintroduced to us on the premiere as she sits down to have a heart to heart with Bachelorette Hannah Brown. She confesses to Hannah that she actually has been dating someone for a few months and that ‘someone’ is a woman. Rather than referring to herself as bisexual, gay, or even lesbian she chooses the term ‘sexually fluid’ to describe the situation.

By the way, the term I would use to describe Demi is Borderline Personality Disorder which means anyone looking to be in a relationship with Burnett better WATCH…OUT! You are in for a rough ride.

Anyhow, regardless, Demi has decided that Paradise is the perfect place to test her new found sexuality and see if she is really ready to go girl or if she may still have a male soulmate in the bachelor Franchise.

And for several episodes her and 32-year-old Derek Peth appear to be progressing in a relationship but things will quickly change.

Demi does not find love on the show with a man. And previews show her confessing her love to a woman and that woman is her now fiancee Kristian Haggerty.

I suspect that producers were scrambling to find a way to still cast Demi on the show even though Demi was technically unavailable during casting so having her test the waters of temptation was the perfect cover. The show didn’t get their Corinne style crazy with Demi, but they certainly did get their X Factor as this will be the first same sex engagement for the franchise.

Kristian is the roommate of Bachelor alumni Catherine Agro from Colton Underwood’s season.

“Demi’s girlfriend showed up on the beach late last week, Demi told everyone this is the woman she’s been dating, they were given a date card that night, and got to stay on the show. Demi’s girlfriend is Kristian Haggerty.”

“Demi and Kristian have been seeing each other since around February, and all this of Kristian coming on the show was pre-planned,” according to Reality Steve.

“Demi talked about it with producers, she knew Kristian was gonna be brought in after filming had started, and she wanted to use the show as an outlet to come out as bisexual,” ….. “They’re not having Kristian battle over other men for Demi or anything like that. They are there and they are a couple and, seemingly, I guess just seeing where it goes. But the fact they didn’t leave together right away makes me think these two will stay ’til the very end.”

And how can producers expect a single man on the show to divert his gaze to a single straight available female when there are two very hot young lesbian’s hooking up in their vicinity? Time will tell how this brand new situation will unfold on the show.