Julia Rae and Sheridan Reed broke up 2 weeks ago on The Bachelor Presents: Listen to Your Heart.

The duo could definitely belt out a tune, but failed to find romance. Julia dumped Sheridan telling him she did not share romantic feelings for him. Sheridan was devastated.

Julia went on to try things with Brandon, but the relationship was short-lived after a lackluster performance of Pat Benetar’s “We Belong”. A performance that may or may not have been sabotaged when Natascha Bessez informed Julia that Savannah McKinley was actually Brandon Mills first choice just before their big performance. 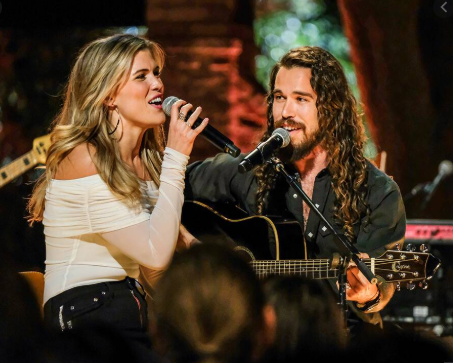 The bad performance resulted in their elimination prompting her to lament about ending things with Sheridan express regrets about dumping Sheridan.

In fact after Julia left the show she attempted to reunite and reignite things with Sheridan. The two had been talking and flirting for a few weeks.

But according to ET Sheridan has officially shut down any possibility of a romance…after watching the show. He said that formerly he “was open” to the possibility, but and he now has no lingering feelings for Julia.

“For me, it’s a no,” ….. “I cannot see it happening … I think relationships are built on trust and communication. … Trust, to an extent, has been broken … I feel like considering it again would be being okay being second choice, and I’m not going to do that to myself. … Watching the breakup was definitely hard. That entire situation made it feel like again, second choice a little bit. I’m not going to be somebody’s second choice. Which, since the show she’s tried to tell me [I wasn’t,] which I’m like, ‘No, obviously I was in this situation.’”

Sensitive Sheridan remarks that watching the show has confirmed to him that Julia did not have real feelings for him:

“In episode two, in the interview where Julia talks about essentially about wanting Brandon’s rose or leaning towards him essentially; that was very much news to me,” ….. “[And] after our performance where she said she was still wondering how Brandon was feeling; that stung especially, because that was at the p

The Bachelor Presents: Listen to Your Heart airs Mondays at 8 p.m. ET/PT on ABC.