Today is Thursday. Tuesday part 2 of the Bachelor finale aired and we saw Bachelor Peter Weber first get dumped by his dream girl Madison Prewett and then promptly pull it together to propose to girl number 2, Hannah Sluss on the actual finale.

On After the Final Rose, we saw footage of Peter dumping Hannah after a few weeks of being engaged because he was pining for the love of his life, Madison.

Then on the live portion of the show, Peter and Madison decided to give their relationship another go despite an amazingly strong objection by Peter’s mom (really his entire family, but clearly mom was appointed to voice concerns on the show).

So to say I am shocked by today’s announcement that the two have already decided to call it quits, would be quite an overstatement. I did think the two would last more than 2 days, but the days were numbered none-the-less.

The 2 took to social media to announce they were parting ways.

This is a portion of Peter’s statement, (I had to edit the cringe-worthy fluff).

….Madi, thank you for your patience and unconditional love. ….

Madi and I have mutually decided to not pursue our relationship any further. Believe me this was not easy for either of us to be ok with, but after a lot of honest conversations, we have agreed that this is what makes most sense for the two of us. The love and respect I have for Madi will continue to endure.

Hannah Ann, you set an example for women everywhere a couple nights ago. You are such a strong, confident woman and you deserve all the love in the world. I accept full responsibility for my mistakes in our relationship and wish you only the best.

This has been an emotional experience and I am so grateful for the outreach of support that I have received from friends, family, and Bachelor Nation in the last few days. Thank you to all of you! This is just a another chapter in my story. One I will never forget and one I will always cherish.”

Madison shared the news as well, writing on Instagram, “As Peter and I have decided to go our separate ways, I am confident that we will both move in the direction of our purpose and never forget that God has a plan in all things.”

“I will always love and respect him. I am convinced our paths were meant to cross and we are both better because they did. @pilot_pete you are an amazing guy and I’m thankful for you. I will always be your biggest fan.” 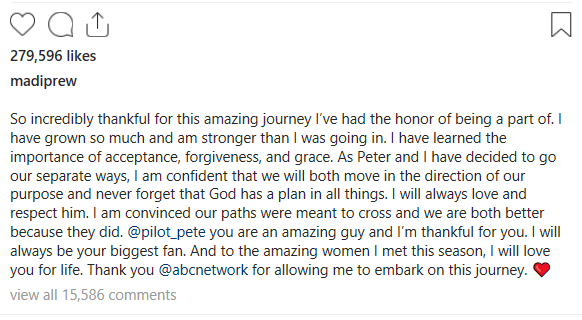 Anyhoo, producers must be devastated because this really makes the process of finding love in 9 weeks on a reality show look pretty hopeless.

Interesting to note ET says the news of the split comes hours after an eyewitness spotted the Bachelor stars having lunch together at Granville restaurant in Studio City.

he eyewitness says they both looked great, and that they didn’t see any PDA or hand-holding.

“It looked like a very intense conversation, to be honest,” the eyewitness says. “She was the one talking, he was kind of just nodding.”

Personally, I think the two were made for each other. Neither one of them says a single honest or genuine thing. Nothing but fluff and positivity. Hannah was right when she confronted Peter about his words meaning nothing.

Sorry ABC, Peter was a BAD choice to lead the show. He falls in and out of love at the drop of a hat.

The good news is that it means we will get to see more of Peter and Madison on the spin-off Bachelor in Paradise.

The finale is more BRUTAL!