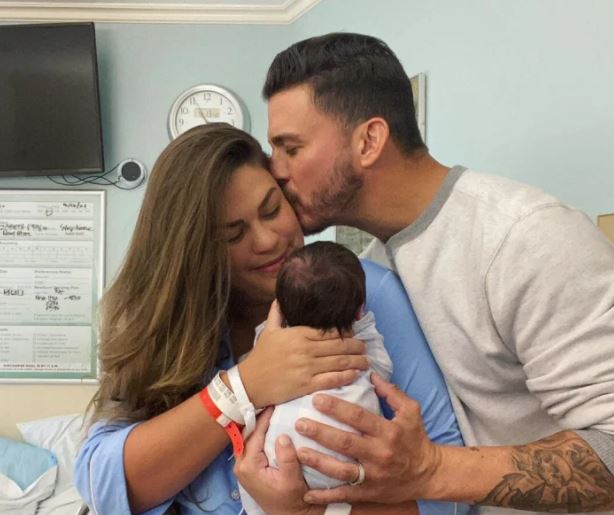 Thirty-two-year-old Brittany Cartwright and 41-year-old Jax Taylor have had a rough year after being fired from Vanderpump Rules and Jax being caught owing 1.2 million dollars in back taxes, but one bright spot has been their pregnancy. And today, April 12, 2021, Brittany gave birth to a baby boy, Cruz Michael Cauchi.

E! News got the scoop on their newborn son.

E! News Tell us about the inspiration behind your son’s name.
Brittany: From the very beginning we had a girl’s name picked out, and when we found out it was a boy it took us a while to decide on a name. I was probably around five months pregnant when we finally decided on Cruz. Cruz means “cross,” and coming from a religious family I thought that was amazing. I also, of course, think it’s super cute and goes with Cauchi so perfectly.

A lot of people don’t realize that Cauchi is Jax’s real last name. His late father’s last name is Cauchi so of course we wanted to continue his legacy with our son and family. Michael is Jax’s middle name and his uncle/godfather’s name. As an added plus, Michael has always been my mom’s favorite boy’s name ever so she was so excited.”

The couple announced their pregnancy in September 2020. and their due date in March:

“Since so many people are asking, @littlebabycauchi’s due date is April 13, and I cannot wait!” …Doctors are saying he is measuring a little bit early so fingers crossed LOL, but he will come when he is ready! He is perfectly healthy and a big boy! So in love already!”

Oh dear, is the world really ready for another Jax? It seems like just yesterday Jax was having sex with waitresses on the bathroom floor of SUR, cheating on Brittany with Faith, being arrested for stealing sunglasses in Hawaii, drawing lines of cocaine in the background while crews were filming….sigh….I guess those days are gone for good now.