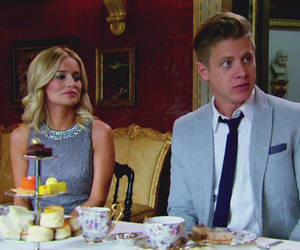 Every season we like to do a personality breakdown of the Bachelor/Bachelorette so we can figure out exactly what kind of situation we are dealing with. We like to use the enneagram because it is the oldest known tool for understanding personality traits.

Simply stated, “enneagram” is a Greek word meaning “nine-diagram”.  The tool and all of its various incarnations dates back to the beginning of civilization and the ancient Sufis.

The common nomenclature for the nine points is from Understanding the Enneagram: The Practical Guide to Personality Types (revised edition) by Don Richard Riso and Russ Hudson.

English: This is a colorful gradient version of the Enneagram figure or diagram. (Photo credit: Wikipedia)

I have to admit Emily had me fooled during Brad’s season. I had her pegged as an enneagram personality type three simply because or her ability to put her look together. No one throws an outfit together better than a three. But, I also knew her quiet demeanor and rather mild-mannered personality were not typical traits of a three. Sigmund Freud referred to the three’s larger than life personality as “admire my genitals.” Remember how much genital admiration there was with Courtney Robertson? Whereas healthy threes can handle any situation with amazing charisma (see Trista Sutter and Chris Harrison).

So, after a much closer examination of Emily Maynard during her season of The Bachelorette, we realized that although she is gorgeous and very well put together, she is not a three. grilling Brad about dating other women while he dated her (Hello Emily?! have you seen the show?), I started to think we were instead dealing with an enneagram personality type six, and an unhealthy version at that.

The six has enormous problems with safety and security and unhealthy sixes lash out if that security is threatened in any way. If they are average or unhealthy they take all the romance out of any relationship by giving any potential suitor the third degree.

Case in point from the several episodes of The Bachelorette we’ve seen so far: Emily’s hotness soon disappears when she gets insecure and demands answers to hypothetical situations from her suitors on the show and when she doubts their motives.

The Enneagram Institute refers to the personality type six is “The Loyalist,” because sixes are the most loyal to their friends and to their beliefs of all the types. But because they are loyal to beliefs, they are often looking for an authority figure to give them the direction they need. So this number consequently has the most problems with autonomy and independence.

They fight for their beliefs more fiercely than they fight for themselves. This is why most military servicemen and women are sixes. You can see why this would be a very admirable trait, but it also can be very frustrating as they will follow authority figures at the expense of themselves. And on the show, it’s easy to see how Emily possesses these attributes. She threw a complete fit when she thought, during “The Kalon Situation,” that the guys might not have her back and she, unfairly, in our opinions, grilled them and made them feel awful for not telling her about Kalon sooner.

And, concerning the sixes basic desire to have security and support, you can also see why all the things Jef Holm has been telling her is music to her ears: “I want to marry my best friend.”  In relationships, sixes are always looking for a “best friend.”

They are also looking to know that person is in for the long-haul and will not abandon them. Thus they may test the person for some time prior to revealing any vulnerability. And if any one of these guys betrays her in some way she is likely to lose interest. Sixes also really want to be liked and accepted by a partner’s family and friends.

This is also why she has dates making cookies for Little Ricki’s soccer practice. The six needs to know that the person will enjoy the duties of a relationship as much as the romance.

When sixes are healthy, they integrate to ennegram personality type nine and become self-possessed and confident. We saw that, for a flicker of a moment, when Emily yelled at Kalon to “Get the f@ck out!” with an extremely sexy amount of confidence.

For the first time all season, she just takes action without looking to someone else for guidance. But, unfortunately, she quickly disintegrated back into self-doubt and lashed out at the guys for not stepping in to handle things. Emily has potential to integrate to her healthy autonomous self. That self would stop grilling these poor guys and enjoy the ride! Emily, you are the lead of the most amazing show ever — you are a winner no matter what happens!

If she’s able to grow and change throughout this experience and to become the most healthy version of herself, we would see a reliable, hard-working, responsible, cooperative, trusting, and most importantly internally stable and self-reliant person emerge.

So, only time (9 weeks) will tell if Emily will become self-actualized or self-destructive this season! Either way, we are sure this season will continue to be a situation!