Jef Holm interview: Bachelorette behind the scenes and a $5M non-disclosure! 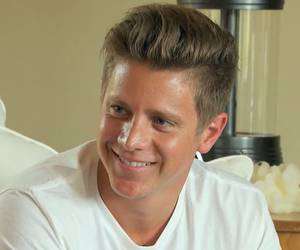 Jef Holm recently revealed some behind the scenes details to Utah Valley Magazine about how challenging it was to be on The Bachelorette and to keep secrets from his friends and family. Obviously all worked out in the end, but behind the scenes, between producers and his family, things apparently weren’t so easy.

Apparently Jef’s LDS parents begged him not to do the show. But once taping stopped and the show began to air, Jef confided in his Dad, after the eighth episode, that he was engaged to Emily. Jef Holm at his family’s ranch in St. George Utah

Jef told the magazine about revealing he had won to his Dad: “I told him that the women in our family are really bad at keeping secrets — so don’t tell mom.”

This is still the most intriguing part of the story. Obviously his parents are devout Mormons so it must have been difficult to see their son pursuing a non-Mormon girl. And we have all heard the details about his brother Mike Holm going to the tabloids to report on Emily “sexting” another guy, so is there some “Judgy Judgerton” happening behind the scenes by his family? And perhaps a concerted effort by at least one family member to destroy the budding relationship?

The interview reveals some rather amazing nuggets of information we have always wondered about. Here is a brief excerpt from the interview:

UV: What was the hardest part of keeping the secret?
Jef: Some people would come up and say, “I’m so sorry you didn’t win.” I would just say, “Yeah, that sucks.” When people would ask me if I won, at first I would just say, “I can’t tell you. You’ll have to watch it.” I was under contract — I think it was for $5 million — that if anything came out or leaked because of me, I was liable. After about a week, I got pretty good at deflecting the question.

(Yet another reason I think the claims that Reality Steve’s source is a show insider are totally bogus. No doubt show employees have similar non-disclosures).

UV: What did your parents think?
Jef: Both of them begged me not to do it. They knew the show had hot tub scenes and trashy situations. But I kept assuring them that the producers were telling me this season was different. Emily was a mom and didn’t want that stuff on the show. But parents always want to protect their kids — that’s what loving parents do.

UV: What did you tell Emily about your Mormon background?
Jef: We talked a lot about faith and about family service projects we wanted to do. A lot of the principles from being raised Mormon and going to church every Sunday are still with me. On the show when Emily and I had to decide whether to go to the overnight fantasy suite, I told her we should bridle our passions. I didn’t think it was the time or place for us to spend the night together. So yes, that phrase came from the Book of Mormon, and the media picked up on that.

(“Bridle our passions”! what an amazing phrase and a first for the Bachelor franschise!!! Lets hope nothing has to be “bridled” anymore. We are still questioning why ABC chose to hide Jef’s Mormonism in our ongoing investigation..the “Disney Mormon Conspiracy”)

UV: What was it like when Emily met your family?
Jef: I was debating whether to take Emily to St. George to meet my family or whether to bring her to Utah County where she could meet my friends and see where I make my living. My family is very private — I haven’t taken that many girls home. But the biggest thing Emily and I have in common is that we both want a solid family — and that’s exactly what I have. I wanted to show her what we could have.

UV: How involved are the producers in what happens?
Jef: The most common thing I get asked is if the show is scripted. But the producers want you to be yourself — from the way you dress to the things you say. There were times they wanted us to repeat something because they didn’t get the right angle.

UV: How does compensation work on the show?
Jef: The guys don’t get compensated, but Emily made a lot of money. In our contract, it says that if we get married ABC can bid on filming our wedding. So that could be crazy money, but we’re not sure we are going to do that.

Wow! Jef covered a lot of bases that have not really been addressed by past contestants or producers. Thanks Utah Valley Magazine!