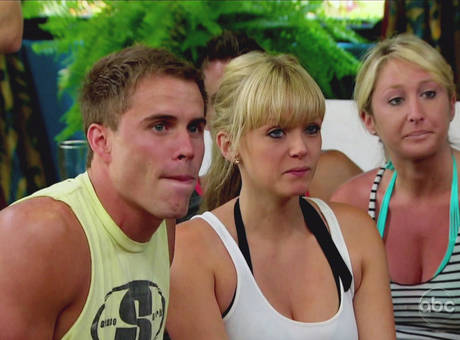 During a Thursday media conference call with reporters, Chris Harrison discussed Bachelor Pad 3 and gave some hints about the “disturbing finale”.  When asked to dish on the Michael Stagliano and Rachel Truehart situation he said Michael is not in love with Rachel….

Chris Harrison: You know, it’s probably half and half.  Rachel had a — it was a tough one.  First of all, facing Michael, it was very

difficult for her.  And the way we do it, it’s kind of tough because you have this kind of talk show.  But at the beginning, I can’t have the final four out there because there’s game play involved.

And again, there’s — again, I talked about wearing different hats.  In the beginning, I’m Bachelor-Bachelorette host where I’m kind of doing the tell all and we’re dealing with all these situations.

(Wait a second, we just have to pause for a minute as Chris Harrison said “dealing with all these situations”!!! — Amazing!)

But we can’t really do that with the final four because there’ s also a quarter of a million dollars in play.  And so there’s rules that we have to follow as far as the game goes.  And so the final four aren’t out there in the beginning. And so, once they come out and we start dealing with these relationships, it is very emotional.

It is tough on Rachel, and Michael, by the way.  Because it’s like we can’ t — it’s hard to get mad at somebody and I know we all will maybe get mad at Michael a little bit, but the bottom line is, he doesn’t love Rachel. He doesn’t want a relationship with Rachel.

And so how do you delicately tell somebody that?  And he tried.  He tries to in the show, but it just doesn’t go over well.  And you look at this beautiful girl, Rachel, and she looks phenomenal in this black dress when she comes out on the show and it’s easy to sympathize and empathize with her.

We’ve all been there, and so it was very emotional. But the game itself also is something that Rachel is involved in, so she deals with Michael and then she has to deal with the show.  It’s a very volatile situation.

And we’re trying to think like, “Okay, how do we say this is very different than just the garden variety drama that we bring, you know, every season and every week, year in and year out?”  And it’s a very different event that happens in particular that we’ve never seen before, so that was the — we had to bring something new to the game.”

We’ve already seen from the previews that Rachel loses her $h!t on Michael on the finale and you know how it is when you have chemistry with someone who betrays you and you have to see them for the first time. She must be thinking as soon as he sees her he will remember their chemistry and realize he made a mistake, but apparently Michael never really loved her despite implying he was “falling for her.”

Michael apparently got back together with the girl he was dating just prior to going on the show, Emily Tuchscherer, also known as”Emily from Chicago”. We are still wondering how Emily feels now that the show has aired and she has seen how Michael seemed to be really “into” Rachel. It’s an interesting twist considering last season of the Pad we watched a heartbroken Michael deal with being rejected by Holly Durst.

But this is harsh…”he doesn’t love Rachel. He doesn’t want a relationship with Rachel”.  Ouch!