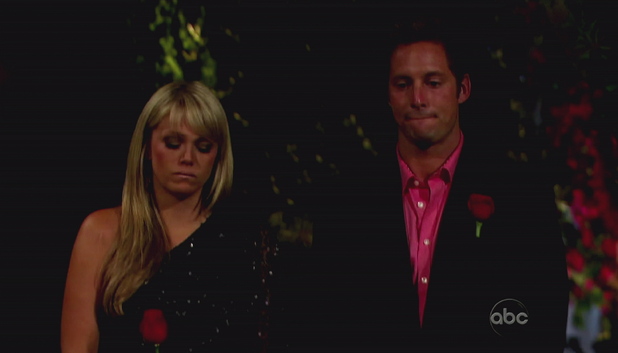 This season of Bachelor Pad has been one surprise after the next. And one of those surprises was the success of shy, sort of the unmemorable (at least on screen), lacking a little “razzle-dazzle”, 27-year-old personal trainer from Tampa, Florida, Nick Peterson. He definitely didn’t stir things up, bring any drama, or create any situations! In fact, we had not written a single post about him until last week. Last week, he finally stepped out of the shadows — thanks to Night Ranger and a backstage pretty sauce makeover by Rachel — but other than that we haven’t got a clue about what makes this guy tick or how he got so far!

Clearly he has some amazing “ninja skills,” as Penny Farthing says, because he has made it to the finale without even trying.

So, luckily, Chris Harrison answered some questions about these ninja skills recently, which were clearly happening outside the range of boom mics and cameras.

Chris Harrison tells Zap2it, “He really didn’t do anything! [laughs] He ate protein shakes and eggs and I think he did a lot of push-ups. And that was about it. He didn’t have a love interest, he didn’t have any battles. He didn’t win any challenges. It’s not like he didn’t make friends, he got along with everybody, but that was just it — he was this nice, good guy who just kind of hung around … he really floated through, kind of under the radar, which may be one of the smartest plays ever because he didn’t make waves one way or the other.”

There you have it! Nick “ate protein shakes and eggs and did a lot of push-ups.” Amazing!

I will say to Nick’s credit Penny Farthing did just unearth the most amazing Nick workout video of all time. If you weren’t sure how you felt about him you gotta see this! You will fall in love with Nick Peterson!!!

Luckily, there are other things to look forward to on Monday night’s finale. We actually can’t wait to see the giant smackdown between Michael and Rachel. Rachel is clearly pissed and hasn’t moved on. And it sounds like she has every right to be according to our source Stephie C who knows a friend of Michael’s current girlfriend. (We are also still waiting for Wetpaint and the prolific Examiner Bachelor bloggers to catch on to our amazing scoop…that Michael’s girlfriend in Chicago is Emily Tuchscherer, @emilytuch on Twitter. They supposedly got together right before Bachelor Pad started filming and got back as soon as Michael went home).

We can’t wait for Monday’s “most shocking and most disturbing finale ever!”