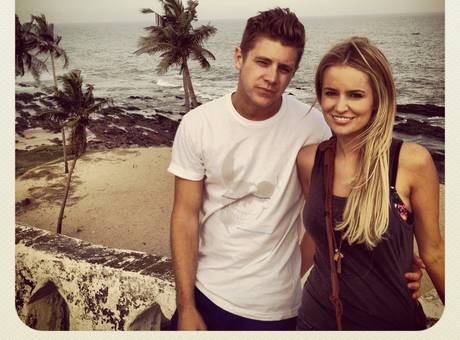 Well, Reality Steve’s legal wiretappers just dug up a doozy: Emily Maynard and Jef Holm are no longer engaged! And, because we know Reality Steve is pretty much ALWAYS RIGHT, since he hires people in shrubbery costumes to spy on Bachelor Nation, we seriously believe him. We also believe him because although A LOT of tabloid trash is exactly that, the Emily and Jef tabloid stories were a bit too abundant and a bit too believable (mainly because actual sources with names were coming forward, and not just unnamed “insiders”).

Now, I still think that even the somewhat believable tabloid stories were probably only 60% true, but even a little bit of truth meant things were just not all that peachy keen between these two.

Which brings us to Jef and Emily. I’m going to get right to the point. I don’t care if you don’t believe me. I don’t care if you say I’m crazy. And I don’t care if you have 1,000 questions for me. Until Jef and Emily officially go on the record and release a statement, I guess that’s when you’ll believe it, but I can tell you right now that Jef and Emily broke up this weekend. Done. Over. No longer engaged. This isn’t being reported anywhere else. No magazine or gossip site has it yet. It’s just what I feel comfortable in reporting based on what was told to me. Yes, I know, I know. I can hear your questions already coming, “If they broke up, why did they go to the Panthers game together?” “If they broke up, why is each still following each other on Twitter?” “If they broke up, why is each default Twitter picture a picture of them together?” All legitimate questions. And here’s what I can tell you: It just happened a couple days ago. This isn’t a rumor, I didn’t hear this 5th hand, and I’m not making something up for attention. All I’m here to tell you is that Jef and Emily are no longer an engaged couple and have broken up.

Right now, they are in the process of figuring out how they are going to present the breakup to the media, when they’re gonna release the statement, and who the statement will be released to. Could be tomorrow, could be in a few days, could be next week, could be in two weeks. I have no idea. They have a few things that obviously need to be sorted out and they’re gonna need to figure out what the reasoning is they want to give the media. So of course if one or both of them changed their Twitter default picture and took the other one out, that’d pretty much give it away. You won’t see that stuff done until they release their statement to the media, whenever that is. Not to mention the lovey dovey tweets between the two of them have come few and far between in recent weeks, no? That’s the biggest problem these couples have with Twitter. Hell, ANY couple has with Twitter. The second you start tweeting all these pictures of yourselves, the minute you stop doing it as consistent as before, immediately red flags get raised. I can tell you that all the stuff you’ve heard over the last two months, coupled with other things, is why they are done. If you honestly think that none of the reported stories in the tabloids was true, and all of it was made up, you have your head buried in the sand. Where there was smoke, there was fire, and these two tried their best to bury every story written about them. Unfortunately, you can only take so much.

I actually told Ok! Here is the Situation’s Christine Lo (C Lo) this past weekend something like: “I bet Emily and Jef want to officially break up, but now they have to wait since Ben and Courtney stole their thunder on Friday.”

Ultimately, this is really heart-wrenching news. I especially feel badly for Little Ricki. I wasn’t a big Emily-as-Bachelorette fan from the get-go, because 1) I thought putting her daughter on a reality TV show like The Bachelorette was kind of a shocking decision (Note: Jason Mesnick had his son on the show, but only minimally in comparison) and 2) C Lo and I always maintained that although Emily had her share of endearing qualities (and a really tragic love story), she never struck us as someone that was all-pulled-together and self actualized enough to be the show’s lead and to be ready to seriously find love….on a TV show in 9 weeks. As a reminder, here’s a link to our enneagram personality breakdown for Emily Maynard.

But, at the end of the day, even with our doubts, when she picked Jef Holm, and when we saw the two of them acting out their feelings via marionettes, we were SERIOUSLY HOPEFUL that things would work out and that they would start a wonderfully happy and long life together.

I just don’t think the people in charge of casting the leads for the franchise are doing a good job lately. In general, they’re picking people to lead the show that are: too young, too immature, and not self actualized enough. I’m really hoping we see a solid and healthy lead in Bachelor Sean Lowe. My fingers are crossed and I will always and forever love and watch this show. We just need more successful couples to root for!!

When is Ashley and JP's wedding? December 2012