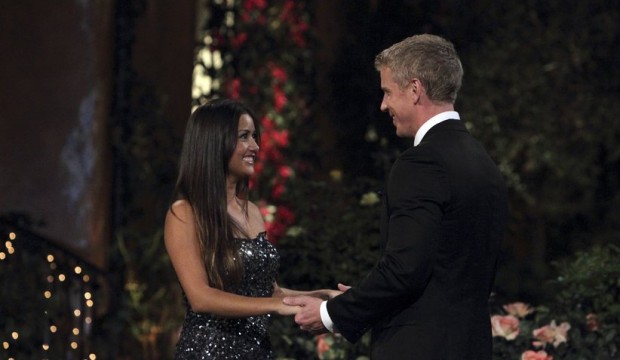 We are less than a month out from the tear jerking finale and already there are reports that The Bachelor couple is on the outs according to a Life & Style report. Man do we hope the Sean and Catherine break up rumors aren’t true!

Apparently eyewitnesses spotted Sean Lowe and Catherine Giudici fighting publicly at The Sayers Club in Los Angeles on March 18 while celebrating Sean’s  first Dancing with the Stars performance– and again just two nights later while walking back to their apartment complex where they have separate apartments.

“About an hour after they arrived, Sean and Catherine were in a corner, and she was clearly mad at him, yelling at him,” the source told Life & Style.

The pair’s argument at the club supposedly lasted for about a half-hour.

And another source reported a “chill” in the air earlier that evening at the Planet Dailies restaurant — for the Dancing with the Stars after party.

“They sat side by side at a table at the back of the restaurant with some friends, but they hardly talked,” the second source told the magazine.

“Catherine was texting on her iPhone while Sean was drinking beer and toasting with his buddies that he had flown in from Dallas. He was being very goofy, very frat boyish, and Catherine looked like she didn’t want to be there.”

So this is getting interesting especially after a body language expert claimed the relationship was a fraud. I don’t think that Catherine is faking it, but I am wondering if Sean is and has been all along. I suspect Catherine is frustrated because now that she has Sean off-screen he isn’t that “into” her physically which would make any girl insecure. This is also what happened with Jake and Vienna when Jake did DWTS leading many to speculate that Jake was gay. Hmmmm, this may be a situation……

Kiptyn and Tenley still together? Nope! Break up alert!