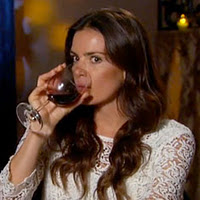 Courtney Robertson is a model from Scottsdale, Arizona, best known for her role as the villain and winner of season 16 of The Bachelor has an estimated net worth of $200 thousand dollars.

Not bad for 30. Courtney lives in Santa Monica, California and has been modeling since she was in her early teens.

Represented by Ford Models in Los Angeles, Courtney has appeared on the cover of Fitness Magazine and in a Caesar’s Palace commercial.

Courtney currently has a book deal with HarperCollins Publishers about her time on The Bachelor called, I Didn’t Come Here to Make Friends: Confessions of a Reality Show Villain.

Her father, Rick Robertson is a prominent real estate attorney in Scottsdale.

She was engaged to Ben Flajnik on the season finale of the show in March of 2012, but broke-up after eight months of dating, long distance.

She has a lot of famous ex-boyfriends including: Desperate Housewives star Jesse Metcalf, Arie Luyendyk, Jr , Cavan Clark (dated before Ben Flajnik and AFTER Ben Flajnik (spring of 2013) for a few months), Entourage star Adrian Grenier, and Reese Witherspoon’s spouse Jim Toth. AND the infamous Jax Taylor from Vanderpump Rules.

The Google Gods must be crazy! Look what they give me for "news"