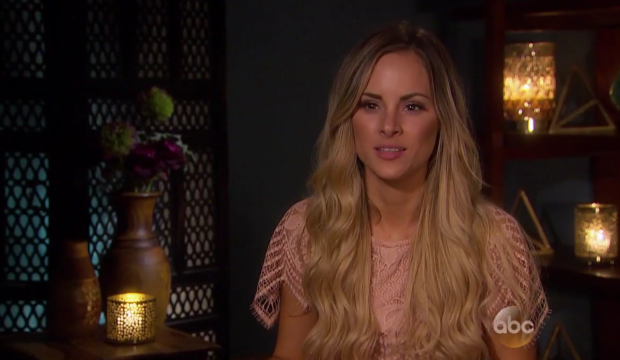 Last night on The Bachelor actress Amanda Stanton opened up to Bachelor Ben Higgins on her recent divorce. She revealed some rather shocking details about ex husband Nick Buonfiglio claiming he cheated on her numerous times and was really not interested in being married despite having two young girls with Amanda.

Ben is clearly not phased by the fact that Amanda is a mom, but I think last night he was looking to hear evidence that things were really over between her and Nick and to know what legal relationship she still had with him since this could be an important detail in choosing a life partner.

According to court documents obtained by RadarOnline.com, Amanda married Nicholas Buonfiglio on October 11th, 2012, but separated on December 10th, 2014. And the divorce was not finalized until June 15th, 2015 citing “irreconcilable differences.” Nick’s take-home salary is $8,750.00 a month from the Orange County Register and he pays $2,000 a month in child support for their two daughters, Kingsley and Charlie. He also paid $1,400 a month in spousal support from January to December 2015 to Amanda. Amanda claims a monthly income of $100 a month. (Where are her residual payments from Disney?!)

Well we know from an insider that Nick lives at home in San Clemente with his mom and dad and this is probably why. Despite making $100,000 a year he is flat broke from paying child support.

Amanda revealed that she decided to divorce him after discovering he had been cheating.

“I found an old cell phone of his, there was a bunch of text messages from ex-girlfriends,”…..”Girls that he was meeting on online dating sites and stuff like that.”

Nick had a Tinder profile while they were married.

Ben Higgins on his 1 on 1 with Amanda Stanton