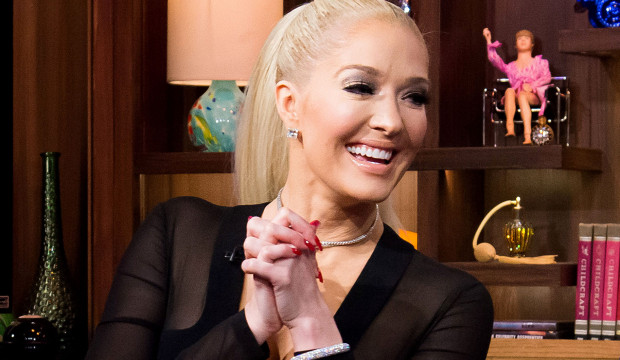 Real Housewives of Beverly Hills star 44-year-old Erika Jayne aka Erika Girardi is the greatest thing to happen to the franchise since Lisa Vanderpump. She is sassy and confidant and makes NO apologies for her racy music videos and role as a sex symbol and gay pride superstar. She also makes no apologies for being married to a man 32 years her senior!

But considering she is so straight forward and cocksure she has a rather mysterious past. Obviously “Girardi” is from her husband Thomas Girardi and “Jayne” is her stage name, but you will be hard pressed to find anything about who she was before meeting her very powerful husband super attorney Thomas Girardi, 76.

What about her life before that?

Actually we know she was born July 10, 1971 in Atlanta, Georgia to an 18-year-old mother. An insider revealed to us that her mother is piano teacher and actress Renee Chahoy, 62.

Erika’s grandfather and Renee’s father Hollis Macy Peek, died in 2010 at the age 81 and her grandmother was Ann T. Peek.

We also know that Erika moved to New York City to pursue her dream of becoming a singer and performer and was married and had a son just before turning 21.

But who is Erika Girardi’s first husband and son? Between the ages of 21 and 28 there is virtually no info on her.

I have been searching high and low for this info, but thanks to an insider we know a little bit more. Her maiden name is Erika Chahoy. She is also known as Erika Zizzo. Zizzo was her ex husband’s last name. His name is Thomas Zizzo. He is 45-years-old and from New Jersey. Her son, the police officer is 23-year-old Tommy Zizzo. He moved from Jersey City, New Jersey to Los Angeles sometime before 2014. He now lives in Pasadena.

The ex looks like quite a situation!–He now runs a business called Hunk Mansion Marketing out of Las Vegas Nevada. It appears that he is running a business of male strippers…or at least a business coordinating male strip packages for women and couples–which is amazing! I also can not find any records pertaining to the official marriage between Thomas Girardi and Erika. In fact there is an IRS lien on taxes filed from 2000-2002 for an assessment of $4,561,436.45 to taxpayer Thomas V Girardi and Erika Chahoy. I suppose it’s possible that Erika kept her last name, but goes by Girardi. She has been with Girardi since 1999. By the way she is all paid up now.

The insider also revealed that Girardi’s wife prior to Erika was Kathy Risner. The two were married in September of 1993. And she was actually his second wife meaning Erika is a THIRD wife.

There has GOT to be more to this story!

Who is Erika Girardi's 1st husband and son?