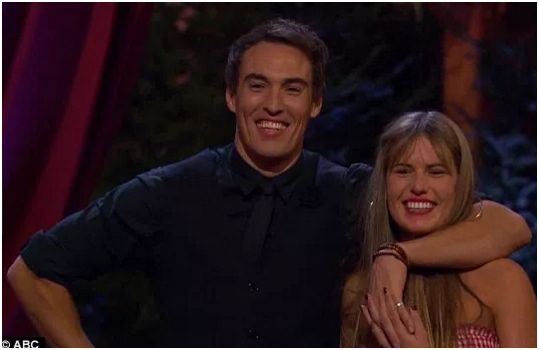 The real story on Bachelor Winter Games comes from the land down under. Courtney Dober and Lily McManus stole the show on the finale tonight. The couple has been super low profile up until tonight, but I guess behind the scenes they were developing a serious connection.

Yep the 31-year-old Actor/TV presenter and model has found love with the girl with the cheeky tattoos. Lily is a snowboard instructor and barista….and she is only 21!!! WHOAH!

Courtney is from Sydney, New South Wales, Australia and Lily is from Darwin, Australia, but lives in Wellington, New Zealand.

The couple is really cute and playful with one another and both claim they have found “the one” even though they decided to forgo the option to forgo their individual rooms and stay as a couple tonight in the Fantasy Suite. Courtney brought Lily to the Fantasy Suite and told her he was ‘falling in love’ with her. Lily replied that she reciprocated the feelings 100% but wasn’t ready quite yet to get that intimate.

“Courtney couldn’t have made me a happier woman. He’s the one. Wrap him up and take him home,” she says in her ITM.

But don’t worry the rejection of the special room did nothing to quell the connection between the two.

So are they still in love? Clare and Benoit are officially engaged!

Are Clare Crawley and Benoit engaged?