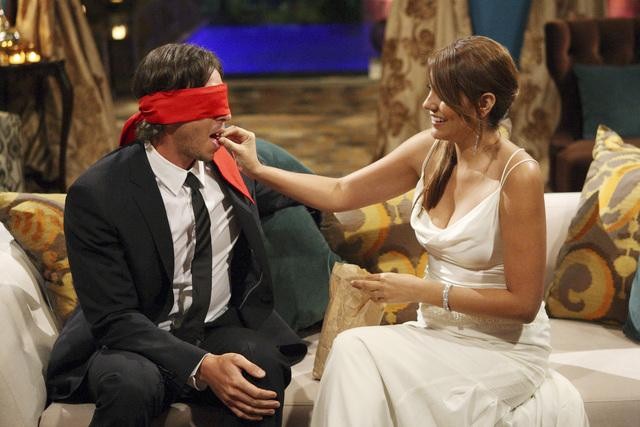 I really wish Reality Steve would stick to weighing in on the episodes and dishing some good behind-the-scenes nuggets on The Bachelor — like the one he dished today about one of last night’s eliminated contestants  —  instead of spoiling the show’s outcome week’s in advance of the premiere. I know, I know. I don’t have to read the spoilers. But Reality Steve has grown so popular and with social media being what it is, it’s nearly impossible to NOT see the spoilers if you’re interested in the topic of The Bachelor and use the internet. So, yeah. It’s frustrating and it kind of ruins some of the excitement of the show. But, I digress….

The awesome nugget he shared today, though, I love because it’s the kind of

new, interesting info us Bachelor fans want to hear! Today, on his blog, he shared: “I think the most important info from all the first night eliminations is today we’ve come to find out that Dianna Martinez, the one who blindfolded and fed Ben candy, is getting married on Jan. 27th. She posted this on her Facebook wall today which pretty much goes to show that, yeah, not everyone takes this show so seriously. Either Dianna had a serious boyfriend before she did the show, went running back to him after filming, and now they’re set to be married in 3 weeks, or Dianna is getting married to a guy she met after filming, which means she’s known him for a whopping 3 months. Good luck with that Dianna. I’m sure it’ll all work out for you in the end. Just be sure to give everyone in attendance at your wedding a blindfold as well.”

The other interesting tidbit I gleaned from his blog today was that contestant Blakeley Shea used to date Wes Hayden, of Jillian Harris’ season of The Bachelorette and Bachelor Pad 1. Small world! Or – that’s how the producers found her. Either way….interesting!

Check out the rest of the amazing ladies on our amazing lady gallery!!!