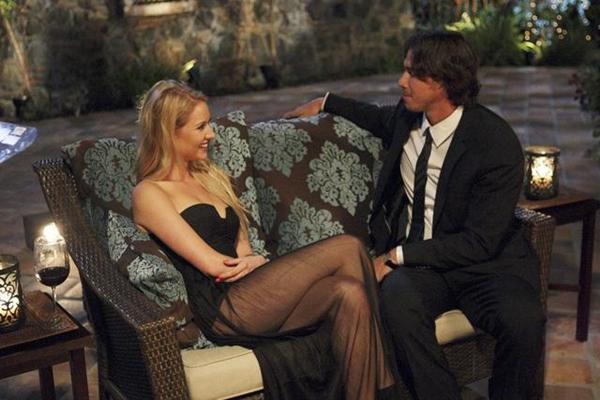 This just in! Hot off the press (of my iPhone text messages)!!! We here at Ok! Here is the Situation LOVE a scoop and we just got a great dollop of a scoop! A friend and fellow Bachelor fan just ran into Casey Shteamer, better known to some as simply Casey S., working in the shoe department at the Fred Segal on Melrose in Los Angeles, CA.

Apparently the former “trading clerk” has relocated to Los Angeles and changed careers, as quite a few former Bachelor contestants often do. This also means she is likely no longer dating the infamous “Michael” she was “Shteam-rolled” off season 16 of the Bachelor for by Chris Harrison and Bachelor Ben Flajnik, when, as we were told, three different people….from the United States….came forward to do their U.S. citizen-ly duty of warning Ben that Casey S “might not be there for the right reasons.” Gasp!

Casey’s former boyfriend was Michael Patak, who runs a trading company called TopStepTrader in Chicago. So if she’s now in Los Angeles and not working with him in Chicago we can assume she’s opted to not only reap the benefits of being a former Bachelor contestant living in Los Angeles, but to also distance herself from Michael “I Never Want to Get Married” Patak. Great for her!

We are rooting for Casey Shteamer to find love. And to sell some awesome Fred Segal shoes. Also, I wonder if she’s still hanging out with her BFF from the show, Courtney Robertson, who has been reported to be “keeping a low profile” in Santa Monica since the show started airing?? We will keep you posted as we hear and/or dig up more deets!

One thing we do know for sure is: One magical full-frontal hug from Chris Harrison really can change lives!!